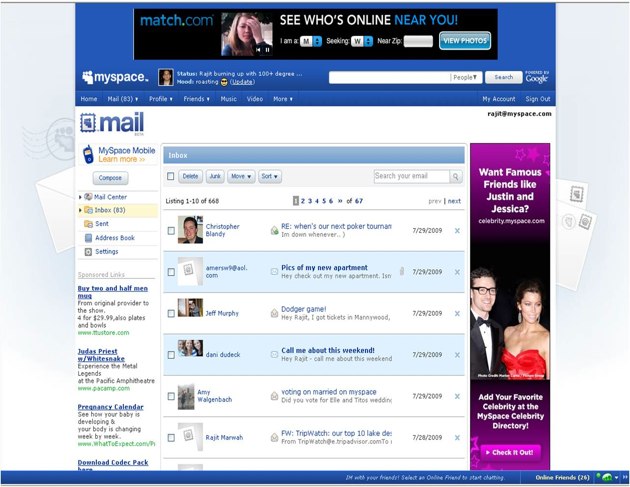 While MySpace is figuring out its future as a sort of entertainment portal, an older and but still heavily-used product has made it out the door. MySpace Mail has been upgraded from simple messaging to a full-blown email service. You can send and receive real emails.

Rumors of the email upgrade started at the beginning of this year, but the company has been pretty quiet on the product front since new management came in this spring. Meanwhile, the site’s user growth has stagnated around 125 million monthly active users since last year, while rivals like Facebook (and Twitter) continue to grow. It’s nice to see things moving again over at MySpace.

The mail feature will go live over the next couple of weeks. For now, the company has only sent out screenshots. Compare those with the old version I currently see on my MySpace account, which has a sort of faux Outlook Express style.

The interface looks nicer than before, but more interestingly, it includes unique @myspace.com email accounts that match user unique URLs. So for example, Britney Spears has myspace.com/britneyspears so she’d get britneyspears@myspace.com. You can send and receive real emails just like in Gmail or other programs. You can also just elect to message MySpace friends.

Judging by the MySpace screenshots, some pages in the program also have an “activity stream” showing you what your friends are up to on the site. Other social networks, like Facebook, don’t offer full email features, and use their mail services as more internal messaging services.

The product has been in the works at least since at least the beginning of the year. The email build-out was begun by the company’s previous executives, founders Chris DeWolfe and Tom Anderson. They had a broad vision for the role MySpace would play in people’s lives. But parent company News Corp brought in Jonathan Miller as its new “chief digital officer” in late March. He oversees MySpace and a number of other News Corp web sites and properties. Under Miller, News Corp fired DeWolfe and brought in former Facebook executive Owen Van Natta to serve under Miller. Van Natta and his new executive team have been busy cutting staff and refocusing the organization on what it wants to be now.

That vision hasn’t been clear yet. News Corp chief executive Rupert Murdoch has said the site could become more of an entertainment portal, while Miller has talked about its possibility as an even bigger gaming platform, and how it needs a culture of innovation.

There are two reasons MySpace Mail makes sense for the company. Email is for many Web users the largest use of their online time. And the bands that already use MySpace’s profile pages to communicate with fans can now add email to the list of options, as CNET’s Caroline McCarthy points out, making MySpace Mail the way the reach fans who aren’t otherwise on the site. It will be interesting to see how mail gets integrated in with MySpace Music — perhaps some sort of automatic email feature that bands could do from their music profiles.

In general, smart integrations of email with existing popular MySpace features could drive more users to both the site and this new feature, keeping them around for longer (to serve ads against) and building the MySpace brand.

So, I’m looking forward to some of the other projects that MySpace has been working on for months, but hasn’t released yet, like its virtual currency. Perhaps all of these products will add up to a big comeback — that would make for one of the better comeback stories of the modern social networking era. 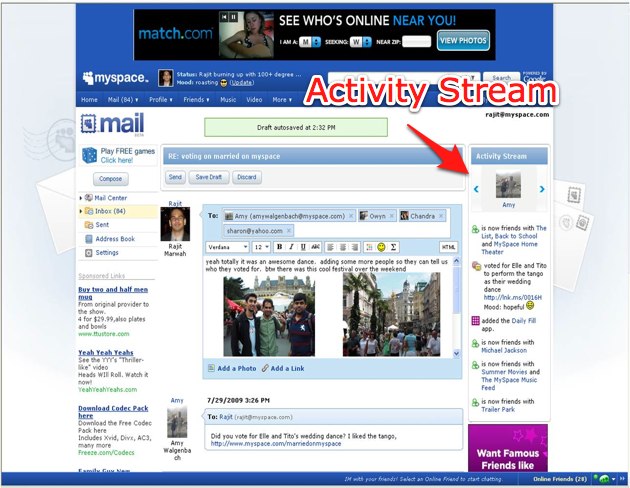