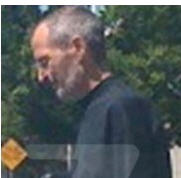 TMZ beat the tech bloggers with this photo of Apple CEO Steve Jobs crossing one of the streets that run through Apple’s campus in Cupertino, Calif., at the bottom end of Silicon Valley. Jobs, whose health has been a hot gossip topic for months, is notably thin following a liver transplant about three months ago. The full picture is below.

The photo was, TMZ says, taken on an iPhone around 3 pm on Wednesday. TMZ implies that the photo is responsible for Apple’s stock price jumping up four points this morning to around $164, but that’s not likely. The bigger news for investors is the possibility that Apple will attend next January’s Consumer Electronics Show, the high-profile gadget exposition held in Las Vega. 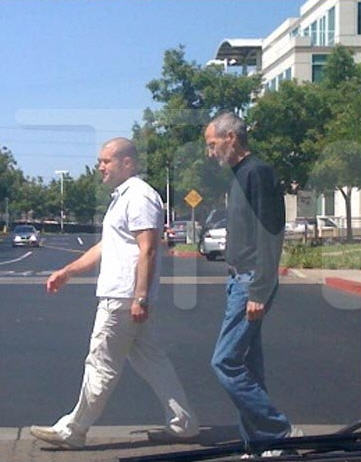 Separately, Wall Street Journal reporter Ben Charny claimed that the president of the Consumer Electronics Association implied that Apple will be present at CES 2010 at a dinner with reporters Thursday night. But don’t believe it. CES is an overcrowded, noisy venue for vaporware announcements like Intel’s Viiv living room media platform. Remember Viiv? Exactly. I’m still trying to erase my gushing BusinessWeek article about it from the Internet.

Apple has a unique ability to hypnotize an overflow crowd of reporters and bloggers into showing up at any event it puts on. In 2007, CEO Steve Jobs proved that by unveiling the iPhone in San Francisco while CES was going on in Vegas. A few weeks ago, VP of Marketing Phil Schiller proved that even without Jobs, we’ll show up. So why should Apple share the stage with stuff like Viiv?