Watercooler, a company that has gained 25 million users on Facebook sports and television applications, is hoping to rack up the revenue this fall with a new version of its popular fantasy football app, Fantasy Football 2009, that emphasizes a combination of payments and targeted ads. It is using a couple tactics honed over the last year by a variety of social games.

One tactic is a premium service where you can see live results for scores within your fantasy football game. When actual NFL teams play every Sunday, you can see how your personally-selected team fared against your friends. The live scoring costs $4.95 until August 1, when the price will about double. Or you can — as in mafia games or poker — take offers instead of paying.

Fantasy football, if you’re not familiar, is a genre of game already popular across Facebook apps (one rival is Citizen Sport) and web sites like Yahoo Sports. The way it generally works is you and your friends start a simulated league at the beginning of fall football season, with each of you picking actual players from the NFL in a draft, then building teams to play against each other. During the season, you track and score each player’s performance in real games, and add the points from each player on your fantasy team to whether you’ve won the fantasy game against your friend. In general, specific rules like player scoring and playoffs differ depending on the company providing the fantasy football game; Watercooler lets you pick a variety of options. 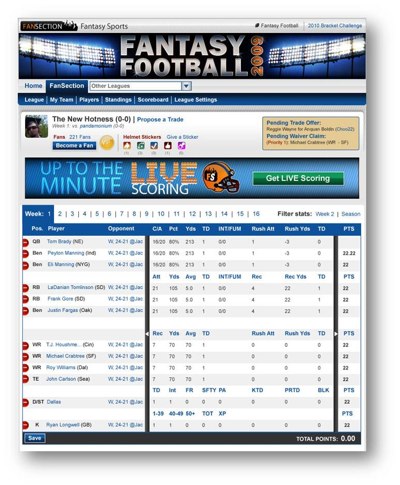 The app itself includes a variety of social components, like most other Facebook apps do — easy ways to invite your friends to join a league, for example. But in this way it is going beyond the closed-group feel of standard fantasy football games. It lets you easily share scores from games, insults and other activities from the app on your own Facebook profile wall and on your friends’ walls.

The Mountain View, Calif. company started looking harder at how to monetize fantasy football in part because it had a very successful college basketball bracket app during the March Madness tournament last spring. It ended with around 1.8 million users, chief executive Kevin Chu tells me, much more than Sports Illustrated’ 600,000 users and CBS’ 400,000. CBS has since inked a deal with Watercooler to run its sports news service within the football app, so friends can see relevent news, like injuries, as the story breaks.

Watercooler is also trying to get a revenue win from advertising. Coors — as you may have heard from its relentless television advertising, the official sponsor of the NFL — is also running ads on the app during the season. The catch, of course, is that only people older than 21 can view these ads, so Watercooler is using a service provided by Facebook to hide the ads from the underage.

But virtual payments and ads aren’t the only two ways the company hopes to make money. Because we’re talking about real-life sports and not just a virtual mobster game, Watercooler is working with partners to let users buy merchandise like clothes while in the game.

That’s three different sorts of revenue streams built around a sports game. And, Watercooler already has some 600 team-based sports applications, where people can share thoughts and feelings about their favorite games and players. To get a head start, the fantasy football app is also being promoted across that network.

The company’s strategy for making money off of sports games looks promising. Expect more sports-related gaming apps from the company in the future.