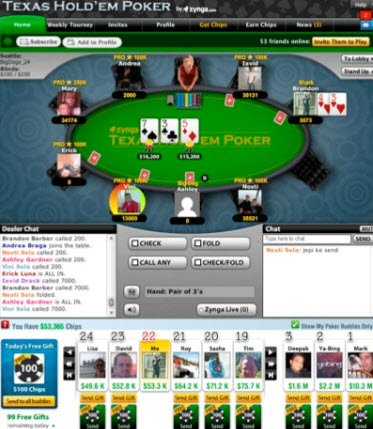 In casual games, Yahoo Games has been the biggest online operator in the U.S. for years. But now it’s been surpassed by Zynga, the social gaming company that has a huge audience on Facebook and the iPhone.

This explains why many game companies are envious of Zynga. Console game sales have been falling for four months. Casual game web site operators are in the midst of a price war. But Zynga can get access to Facebook’s 250 million users. And it monetizes through a variety of means, including virtual goods, where players buy a digital good with real money.

Beyond the poker game, Zynga has a bunch of hot titles. FarmVille, launched two months ago as a clone of the successful Farm Town game, has more than 5 million users, making it the fastest-growing game the company has ever had. Mafia Wars and YoVille are also hot Zynga properties.

Three weeks ago the company had 16 million daily active users. Now it has 19 million. To date, Zynga’s games have been installed 120 million times. Users spend 14 minutes per session and, given multiple sessions per day, spend about 64 minutes a day with Zynga’s games. The total number of user hours per month is 484 million.

Zynga’s critics say it also spends a lot on advertising in order to snag more users. That may be true, but the company is apparently making money. Mark Pincus, chief executive, confirmed to us for the first time that estimates that Zynga will generate more than $100 million in revenues per year this year are “conservative.”

This rapid growth in its audience explains Zynga’s rapid hiring. The company has 330 full-time employees and about 60 contractors. It has 110 open jobs.