The commercial space industry has seen some interesting developments over the past weeks. Statements last week by members of President Obama’s human spaceflight review committee (The Augustine Commission) suggest that commercial providers may be taking a significant role in how NASA accesses low Earth orbit and how missions beyond low Earth orbit use orbiting “gas stations”. At the same time, two commercial space companies, Virgin Galactic and SpaceX, have received significant investments from well known funds (more on that below), suggesting that capital markets see a fundable new industry developing.

Some of these developments are reminiscent of the Internet industry in the early 90s. Prior to 1993, the National Science Foundation ran the Internet as an exclusive tool for university and government research (commercial speech was completely banned from the Internet prior to 1991). The NSF then decided to turn over the operation of the Internet to the private sector. Just two years later, Netscape’s IPO set records for first day gains. Despite the bursting of the dot-com bubble in 2000, the Internet industry has been one of the largest economic drivers of the last 15 years.

The suggestions coming from the Augustine Commission are somewhat reminiscent of NSF’s decision. By relinquishing its domination of low Earth orbit and partnering with commercial providers for beyond low Earth orbit infrastructure, NASA can better accomplish its exploration goals and foster a whole new industry. While we won’t see a space startup in every garage the way we did with Internet startups, the returns for using and developing space resources can be very interesting. 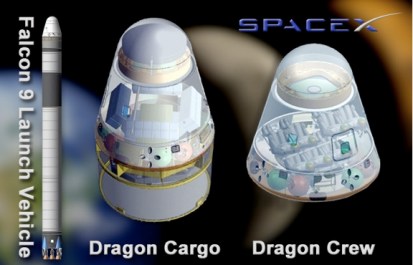 Assuming the Augustine Commission proceeds with these recommendations, commercial providers would be responsible for all low Earth orbit launch capability. The current example of that is the Commercial Orbital Transportation Services (COTS) project where NASA is helping both SpaceX and another commercial player, Orbital Sciences, build the systems and launch capacity to resupply the International Space Station. These resupply contracts represent about $1.75 billion in revenue for each company. If funded, a final phase to the program, called COTS-D, will require private firms to demonstrate their capability to carry human crew members to and from the station, representing another large market that could lead to further commercial contracts. This would represent significant revenue for SpaceX’s Dragon capsule system and could shorten the seven year gap in American-crewed launch capability. This is the gap between the Space Shuttle’s retirement in 2010 and the first flight of its replacement, Ares I. During this gap the US will depend on Russia for access to the space station. Congress and NASA have so far refused to fund the COTS-D portion of the project, but this may change in the coming months.

In addition to access to low Earth orbit and the International Space Station, the Augustine Commission is considering commercial providers for a wholly new capability: fuel depots. Current launch architectures for anything past low Earth orbit require the rocket to launch everything all at once. This means that very cheap fuel (roughly $2 per kilogram) is launched on the same rocket as billion dollar payloads. Fuel is also heavy. This means the actual payload is constrained to make room for that fuel. Rocket costs rise faster than their size so simply building bigger rockets is economically unsustainable. The idea is to separate the fuel from the payload by using cheaper and more frequent launches of just fuel to depots (or what normal people call “gas stations”). These fuel depots would be situated at interesting points around the solar system, enabling larger robotic missions and human missions without new budget-busting rockets. An organization that launches and resupplies these depots could bring in significant revenues from anyone using them, whether that be NASA, international space agencies, or commercial missions.

In order to meet the expected demand, commercial providers are going to need capital markets to help fund the development. For much of the commercial space industry’s history, one of the hardest challenges was attracting enough capital to bootstrap the business. Potential investors noted the lack of documented exits at interesting multiples. But recent investments by well known and experienced funds suggest this is changing.

Earlier this year Draper Fisher Jurvetson led a $15 million (possibly $60 million) round with Elon Musk’s SpaceX. Musk will be using that cash to finish up his Falcon 9 launch vehicle and the Dragon capsule. The closer SpaceX can get the Dragon capsule ready for crewed access to the International Space Station, the more likely Congress and NASA will fund COTS-D. Crew transport contracts represent additional billions in revenue for SpaceX. Not bad for a $60 million investment. 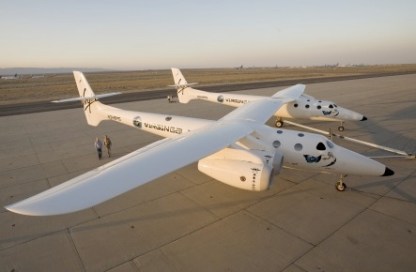 Virgin Galactic released details earlier this week of a deal with Abu Dhabi’s Aabar Investments for a $280 million equity stake. Virgin Galactic will use that cash to begin building its WhiteKnight2 planes (pictured right), designed to carry small payloads into orbit. While the suborbital tourism market usually receives the most press, nearly every player in the industry is developing the ability to carry scientific and educational payloads and to put small payloads into low Earth orbit. In exchange, Aabar received exclusive rights to develop a space port in Abu Dhabi, exclusive rights to the Middle Eastern market, and a 32% stake in Virgin Galactic. This values Virgin Galactic at about $900 million, roughly 40% of Netscape’s market cap after its IPO.

Do these developments mean the commercial space industry is going to duplicate the meteoric rise that the Internet industry? Our ability to recognize stock bubbles should suggest not. But it does indicate that knowledgeable investors think the industry is ready to generate financially interesting returns. Especially if NASA and the Obama Administration follow the Internet model and help create a new and profitable industry.

America could use a new, profitable, and uniquely American industry right about now.

Michael Mealling is the VP of Business Development for Masten Space Systems and a member of the Space Frontier Foundation‘s Board of Directors. Prior to joining the commercial space industry, he was involved with several Internet standards organizations as part of VeriSign’s research division.