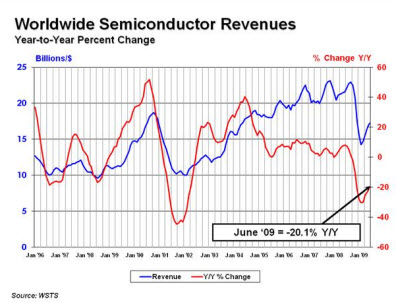 The chip industry is the backbone of everything electronic and so its sales are a bellwether for the tech recovery. Revenues in the second quarter were $51.7 billion, up 17 percent from $44.2 billion the first quarter. Compared to a year ago, sales were down 20 percent from $64.7 billion.

Sales have now been up on a consecutive basis for the fourth month in a row, an indicator the industry is returning to its normal seasonal growth after taking a big dive in the recession, said George Scalise, president of the SIA.

Consensus estimates for unit sales of personal computers — a big part of overall chip demand — are now in the minus 5 percent to flat range, more optimistic than in past months when analysts predicted unit sales would fall 9 percent to 12 percent. Cell phones, another big chip category, could see unit sales declines of 7 percent to 9 percent instead of the previously forecast 15 percent. PCs and cell phones account for 60 percent of chip consumption.

Economic stimulus programs in China and investment in a new generation of cell phone infrastructure is driving demand.