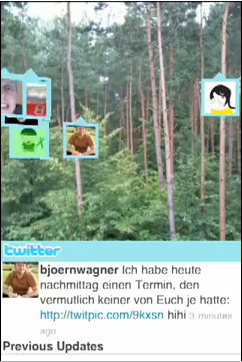 Less than a month ago, a fascinating, if slightly creepy, mobile app called Twittaround launched — overlaying nearby tweets onto a smartphone camera.

The concept was intriguing enough to spark immediate competition: SPRXMobile, the company behind the augmented reality browser Layar, is partnering with Tweetmondo, which handles local Twitter search, to build it.

The partners are offering slots for alpha testers on the Android phone and plan to release an iPhone version later this year.

The alliance makes sense: SPRXMobile is trying to add more location-sensitive content to its mobile phone browser. Augmented reality browsers work by overlaying information over a live camera feed in a smartphone. (Imagine walking around your neighborhood, holding your camera up and seeing real estate listings pop-up over nearby buildings in your viewfinder.) The more data — such as local restaurant reviews and tweets — that SPRXMobile can include, the more useful Layar becomes.

For Tweetmondo, augmented reality Twitter search makes their service seem more immediate. It might be a boon to tweeting local vendors and small businesses, too. Amsterdam-based SPRXMobile is angel-funded.

Below is a video explaining the Layar augmented reality browser:

And here’s a still of Tweetmondo’s current service: 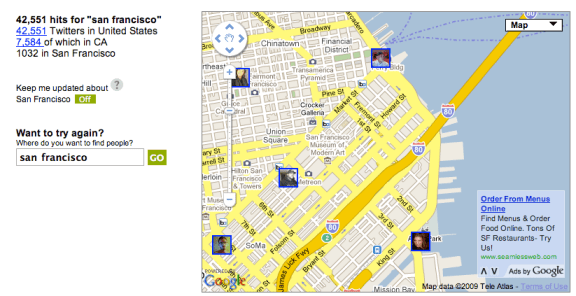