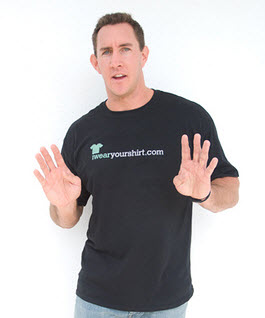 People have found a lot of ways to make money on the Internet, but you have to give credit to Jason Sadler, a 26-year-old Floridian who is the ultimate sellout. He may be getting the most amount of money for the least amount of work, at least as far as ordinary folks go.

Sadler created “IWearYourShirt.com,” where he gets corporations to sponsor him to wear their T-shirts for a day. The Jacksonville, Fla. resident wears a different T-shirt every day and sells each day at its face value, so to speak. On Jan. 1, Sadler charges $1 to wear someone’s shirt; on Dec. 31, he charges $365. Ustream.tv gave him a dollar to wear its shirt; on Jan. 29th, he got paid $29 to wear a Zappos.com shirt.

If that sounds absurd, then consider this. He’s making $66,795 a year by doing nothing other than putting on a T-shirt every day. (He also makes money selling $1,500 monthly sponsorships, and he pulls in advertising money related to his site and video shows).

Today, he’s doing a video with Starmark International, a marketing communications company that is sponsoring his show and giving away a three-day getaway to fans. Starmark says the point of sponsoring is to get outside the norm of advertising and get noticed without spending a ton of money.

“It’s not a million dollar idea,” Sadler said on his show. “That’s not the point. It’s about getting creative with marketing of a business.”

Sadler will be heading to New York to do his show on the road, live from places such as Times Square. There are only two days left in the year in that he hasn’t booked yet — both in December. He will start the bidding for 2010 soon. Evan White, Sadler’s pitch man, will join him in wearing T-shirts next year.

The job has made Sadler into a viral celebrity. He has nearly 15,000 followers on Twitter. He takes pictures in the shirt, posts them to his Facebook and Flickr pages, tweets about them, and has a daily live video show that he posts on YouTube. His stats: more than 124,00 have watched him on Ustream.tv; 180,000 unique visitors go to his web site each month; he has more than 1,700 Facebook friends; his Flickr photos have been viewed more than 58,000 times; and his YouTube shows have been viewed more than 35,000 times. That’s not bad, considering it’s all viral.

Copycats have come and gone. That’s probably the bad thing about this business, as the barriers to entry are pretty low. Competitors include Jenae Plymale in the Midwest; John Waugh in Pittsburgh, Pa.; and Andy Warburton in the United Kingdom. Michael McNeive started a similar nonprofit project in 2007 to promote Alzheimer’s research.

And there have also been a lot of other goofy Internet businesses. Canadian Kyle MacDonald got a house by trading upward from a single red paperclip. Sadler hasn’t had any appearances on Letterman or the talk show circuit yet. So you can bet that his numbers could rise a lot further.

“How much did you get paid to wear your shirt today?” he said recently. “I made $209. My day job is wearing T-shirts and I accomplished putting it on this morning, so I’ve been pretty free all day.” Sadler is a web designer and has used the Internet for his work in the past decade. After working on web design, he decided that marketing and business aspects of the Internet were much more interesting and rewarding.

He co-founded Thought & Theory, a company focused on making simple and beautiful web applications. He has worked with large advertising companies, social networks, pro sports leagues and other new media. He’s also a sports fanatic, a movie buff and a car enthusiast.