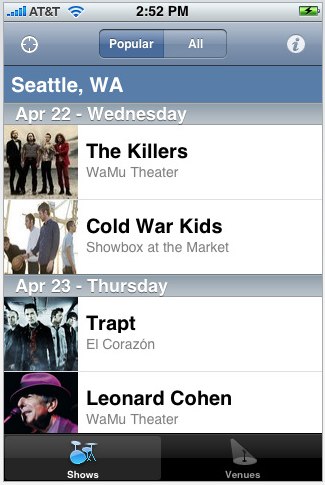 ILike is one of the larger music startups to survive the recession (and music-licensing issues). It has managed to become a “self-sustaining” business through its iTunes plugin and its popular social networking applications. Today, the company is expanding while most of the industry struggles, introducing an upgrade to its “Local Concerts” iPhone application, plus more than 250 musicians’ customized apps for iPhone and iPod Touch.

The new concerts app has already become the 15th most popular free music app on the iPhone, because of two main features: Lists of upcoming local shows and links to buy tickets. The upgrade lets you sync concert listings with your music library on your iPhone or iPod so you can get listings about the groups you’re already listening to. It also takes advantage of the new “push” feature that Apple introduced to the phone earlier this year — you can choose to get notifications whenever a group in your collection is playing near you. Personally, I’ve installed the app; given all the obscure bands I’ve collected on iTunes over the years, I’m interested to see who comes to San Francisco to do a local show.

Meanwhile, iLike has spent the last couple of months building customized iPhone apps for more than 250 musicians. The apps can include photos, videos, blog posts, concerts and other information from the bands. But this effort is ongoing, as not all of these apps have been approved for the App Store by Apple.

In terms of making money, iLike is trying to become the sort of digital middleman in music promotion that street promoters have been up until now. It has already been making money from driving affiliate digital sales to Amazon and iTunes, and ticket sales to Ticketmaster and other concert companies. Over the past year, it has seen advertising grow to become the single largest portion of its revenue, chief executive Ali Partovi tells me. While the company has brought in some Madison Avenue-style brand sales, “our core competency is in the live music industry.” ILike’s Facebook application, for example, shows you what concerts are nearby based on your location — and helps you see what local concerts your friends are also going to. Bands can buy ads that specifically target users based on their location, musical tastes, and more.

Seattle-based iLike’s expansion onto the iPhone could drive more advertising affiliate sales due to people discovering new songs and nearby shows on the go. It has managed to keep costs lower than other music startups. While other music startups, like imeem, have spent time and pounds of flesh on negotiating streaming music deals with major record labels, iLike has kept its costs down by only licensing portions of songs.

The company has 50 million total users, including more than 10 million monthly active ones on Facebook, but iPhone will be a main focus for some time to come. It is also tying in bands’ Twitter accounts with their presence on iLike’s Facebook apps and other locations. Partovi says the company is focusing on the iPhone and Twitter for now, but will continue to tie new services back in with the old ones. So presumably, you’ll one day be able to share your activity on the iPhone concert app with your friends on Facebook.