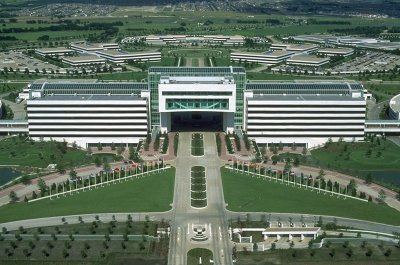 Before the World Wide Web, working for Ross Perot’s IT outsourcing firm EDS was one of the most prized and prestigious jobs in tech. EDS, which Perot founded in 1962, defined the outsourcing business and made Perot a hero to both businessmen and techies.

Perot resigned in 1986, but his brash, I-always-win style continued as part of EDS’s professional brand. (Perot ran for president as an independent candidate in 1992 and won over a that’s-impossible 39 percent of voters in polls, before he awkwardly dropped out of the race.)

Last year, HP acquired EDS and its 137,000 worldwide employees for $13.9 billion. Now, some of the acquired staffers have told NBC Bay Area reporter Randy McIlwain that HP has slashed salaries from 29 to 47 percent among the people from whom McIlwain got numbers. HP has made several rounds of cuts, the most recent of which will take effect September 1st. Only employees based in the U.S. are affected by this latest, deepest cut.

The most striking aspect of the EDS cuts is that most of these senior, accomplished employees didn’t talk about quitting. They told NBC Bay Area that they’re hanging onto their reduced-pay jobs, afraid there’s nothing else out there. A couple of years ago, some of these Texans would’ve gladly slapped Hurd back as they walked out the door. Tomorrow, most will pocket their HP badges and show up for work.

Update: An HP spokesperson emailed me this statement:

“As part of the EDS integration process, a project was undertaken to ensure that employees in both EDS and HP, holding the same roles, receive comparable compensation based on market rates. While pay will not be impacted for the majority of employees as a result of this process, some employees will receive pay reductions while others will benefit from salary increases. We understand that these changes personally impact our employees and we are working closely with them during this transition.

“EDS is an integral part of HP’s long term strategy to provide more services and solutions to our clients.”