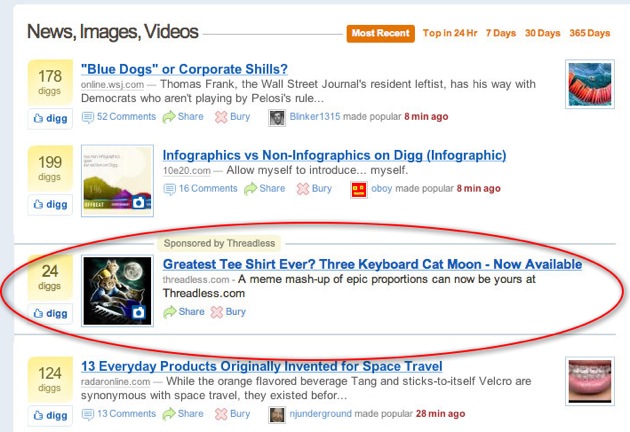 Digg, the super-popular but still not-profitable news aggregator, announced today that it’s starting to roll out the vote-on-ads system that it announced in June.

On Digg, users vote news stories up or down — and with the Digg Ads program, they’ll be able to do the same with advertising. Those ads show up in the stream of news stories (they’re labeled as “sponsored”), and users can Digg them, share them, or bury them.

Those votes don’t just affect where an ad shows up on the site, but also how much Digg charges the advertisers for each click; the more a readers like an ad, the less advertisers pay (presumably Digg will still be making plenty of money from the ad, because it will get plenty of clicks). That creates an additional incentive for for the advertisers to create good ads, and for Digg users to actually read and interact with them. Other social sites like Facebook are also experimenting with ad-voting systems, but it will be interesting to see what kinds of ads show up on Digg, where the readers have some fairly specific tastes (though those tastes change over time).

Digg says those ads are initially just being shown to small groups of users as it’s testing and refining the product: “Expect to hear from us frequently on this topic as we work to create more compelling and innovative ads on Digg.” The San Francisco company has raised a total of $40 million.