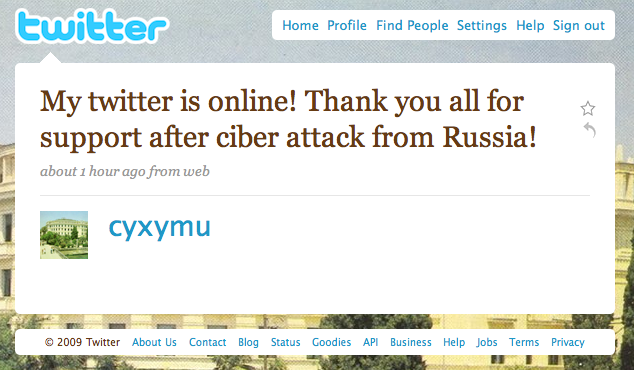 The anti-Russian blogger allegedly at the heart of the last two days’ worth of attacks on Twitter and Facebook is back up on the microblogging service. (His LiveJournal page is still down though.) The blogger, who goes by the handle @cyxymu, blamed the attacks on Russia’s security forces.

Both Twitter and Facebook have suffered distributed denial of service attacks in the last two days, where a malicious party makes so many illegitimate requests of a single site that other users can’t get through. Facebook said the attacks that slowed its service yesterday were all targeted at a single activist Georgian blogger.

“A botnet was directed to request his pages at such a rate that it impacted service for other users,” the company said. Twitter was less specific, saying the attacks were “geopolitical in motivation.”

The blogger, a 34-year-old economics lecturer, told the Guardian yesterday that he believed the attacks were in retaliation for criticism of Russia’s conduct in the war in the South Ossetia region.

“Maybe it was carried out by ordinary hackers but I’m certain the order came from the Russian government,” he told the U.K. newspaper. “An attack on such a scale that affected three worldwide services with numerous servers could only be organised by someone with huge resources.”