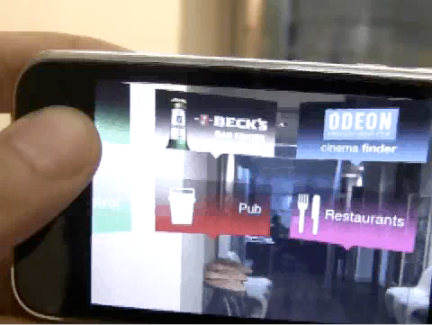 Now British iPhone app developer acrossair, which created the augmented reality subway finding app Nearest Tube, is launching a browser of its own with restaurant and theater listings.

What’s augmented reality? It’s a burgeoning field that lets you see information or 3-D graphics superimposed over real objects in a live camera feed. With acrossair’s iPhone 3GS browser, you can hold up your phone and see little pop-outs showing you nearby restaurants and their distances. (See the video embedded below.)

Although the preview video didn’t show off features beside finding food and entertainment recommendations, you can tell the London-based company has built in other revenue opportunities. In the video, you can see the browser also had buttons for cinema chain Odeon and Becks beer. If augmented reality browsing came into widespread use, it could theoretically give brands more space for advertising beyond physical signage or billboards.

Several other browsers have launched in the last three months: SPRXMobile has the Android-based Layar browser, which has real estate, job and restaurant listings, but only works in the Netherlands. Mobilizy has its Android-based Wikitude browser, which has geotagged Wikipedia articles. German-company Metaio announced plans for an augmented reality platform, which seems to be designed more for 3-D animations than practical uses like finding places to go.

Acrossair has employees in London and Mumbai and is currently self-funded.