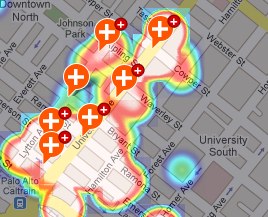 GraffitiGeo is the latest company to offer an iPhone application that gives you a quick way to see and rate restaurants — but it provides the added simplicity of letting you merely point your phone at the physical location.

The application is pending approval by Apple’s app store (and to be clear, this will be the company’s second application; its existing app is meant to be a sort of Twitter-based Digg for restaurant ratings.)

Here’s a YouTube review of what the pending application looks like. You’ll see it shows reviews of restaurants layered over the screen of your iPhone when you’re standing in front of a restaurant and pointing your iPhone at it. You can pan your iPhone down the street and see other reviews.

That far, it’s great. Except then it goes on to try to do too much. The company is throwing in just about everything: It has a “mob” component, where friends can gang together to earn street cred points (mainly by commenting on locations) and take over territories. You can tag a comment to a particular restaurant by tweeting with a hash next to the restaurant’s name. And there’s a heat map showing where all the action is. In some ways, though, you’re not really encumbered by any of these features if you’re only really interested in using one part of the offering, and so GraffitGeo may be well advised to whip out all these features to see which ones stick.

The main value it seems to offer is a way to rate and review restaurants and other joints much quicker and simpler than Yelp. It has jettisoned reviews entirely and instead lets you click once to say whether you liked it or not, and then you can read the tweets about a place to see reviews. In other words, it really is a second-generation Yelp (by being based on Twitter rather than written Web reviews). As a Silicon Valley start-up, it also apparently feels the pressure to emulate the application that is getting a lot of buzz right now, FourSquare, which is a mobile social networking application where you connect with friends and earn points by checking in certain places (you even become “mayor” of a place if you visit there the most). GraffitiGeo throws in in the “mob” feature, and the terminology evokes the popular Mob Wars application on Facebook. There’s also a heat map, which shows where the action is going on in your region.

GraffitiGeo is starting out by focusing on Palo Alto but will be building out in other cities soon. It is a YCombinator company. The weakness I see with this company is that it gives off the feel that it’s throwing a bunch of features together, none of them by themselves better than what’s already out there.