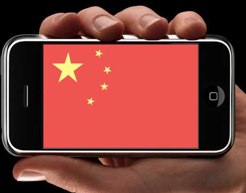 China presents a conundrum for U.S. companies. It’s the largest market in the world, by population, and it’s consistently the fastest growing economy. There’s a huge amount of money to be made there.

However, time after time, local entrepreneurs, either with or without the tacit support of the Chinese government, have found ways to fleece American companies bare. The latest company facing a possible quagmire in China is Apple, which has so far enjoyed cult status and explosive growth in the U.S with its iPhone. For two years now, Apple has sought a carrier partner in China to distribute the iPhone, but it has failed. At first, it was in talks with China’s largest carrier, China Mobile, but the two couldn’t agree on revenue share terms. Now Apple looks to be on the verge of signing a pretty depressing deal with China’s second carrier, China Unicom.

Things are looking a little better for Google in China right now, but the jury is still out there too.

First, here’s the recent background: China Mobile’s executive Luke Bao announced at our MobileBeat2009 conference last month that the company was launching its own mobile application store. Since then, reports have provided more details about the plans: The apps store is coming this month, and its apps will be for use on the carrier’s new series of smartphones. Those phones will be based on China Mobile’s operating system, called the Open Mobile System (OMS). The OMS takes Google’s Android operating system as its foundation, but builds an additional layer on top to offer additional features such as telephony, native java, CMMB/MobileTV, location based services and a customized user interface. The OMS will also send less user data (about location, etc) back to Google’s headquarters than some other Android-based handsets do, we’re told.

China Mobile’s OMS will be compatible with all Android apps, Bao also explained at MobileBeat2009. China Mobile will also announce a way for US developers to submit apps to the OMS store. Meantime, China Mobile has been adding employees to its Silicon Valley offices recently, to make sure it has the support staff to help developers adapt. The first OMS phone to launch is the so-called “Ophone,” which according to people who have seen them, look like a total iPhone rip-off in terms of design (see image below). Dell is a device maker rumored to also have a OMS phone launching with China Mobile. 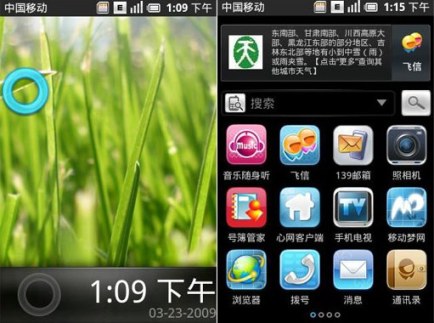 This all comes after a flood of other, cheaper iPhone clones have already hit the market — none of them working as well as the iPhone, and thus creating confusion and dangerous brand dilution (the Chinese will get turned off by phones that don’t work, and they may not buy the real thing when if does hit the market). One mobile professional in China, Sage Brennan, tweeted yesterday: “Tons of iPhone knock-offs in China — I recently saw one with dual-sim, 2/3 iPhone dimensions, running Windows Mobile 6. Ophone is a joke.”

It doesn’t help that one of Apple’s secret latest models of its iPhone, still not released yet, was apparently stolen from a factory manager in China. And even when China gets pressure at the WTO to help enforce fairer competitive practices, piracy remains rampant, and there are no signs this will stop. There are an estimated 1 million-plus iPhones in the Chinese market, all of them are illegally “jailbroken.” To make matters worse, Chinese users already enjoy a vibrant App Store-like experience with a full catalog of pirated, free apps via software packages from Netdragon and others. Will consumers even want to pay for real, priced apps from China Unicom after they’re already so conditioned to free apps?

Of course, Apple may not be blameless. Apple has sought total control over the management of its app store, but Chinese carriers fear they’ll lose ownership of the relationship with their customers — a reasonable concern. China Mobile says it plans to give developers 70% of their sales revenue on apps sold through its Mobile Marketplace, which is exactly the same revenue share Apple gives to the developers of apps in its app store. Additionally China Mobile is reportedly going to waive fees and commissions entirely on app sales for a limited time after launches next week. If the launch goes as planned, its phones will hit the market at least a month or so before the iPhone will.

Apple is apparently in discussions with China’s No. 2 carrier, China Unicom (the carrier has 140 million subscribers, which sounds like a lot, but that pales when compared to China Mobile’s 600 million subscribers and 70 percent market share). China Unicom has bought five million iPhones from Apple in preparation for a September release, according to an unconfirmed report in the IB Times. The companies say they haven’t finalized a deal, but the report suggests they’re about to sign a three-year agreement that would give China Unicom exclusive rights to sell the iPhone in China. The key part of the arrangement, if the report is to be believed, is that China Unicom won’t pay subsidies to support sales of the phone, meaning consumers will have to fork out full price, and this means sales could be tepid. Chinese consumer purchasing power is still far weaker than it is in the U.S., yet these consumers are being asked to pay about $350 for the 8GB iPhone and about $700 for the 16GB iPhone. Apple will generate roughly $100 per unit in profit, according to estimates provided by the IB Times source. That’s much lower than the $400 or more profit Apple has been estimated to get from AT&T here in the U.S.

Many people may think Apple’s platform is formidable and can overcome these hurdles, since it claims global leadership in the app department: It has more than 65,000 apps. It’s unclear, however, how many apps an app store needs to be successful. Most of the apps on the iPhone platform are destined for obscurity; only the top few thousand will see success. It won’t be difficult for Android or other application stores to replicate those top apps (developers of those apps will have incentive enough to make a version for Android).

Two years ago, several analysts predicted Apple would have far more than 100 million subscribers of its iPhone in China in 2008. We’re now a year later, and not a single “legitimate” iPhone has hit the market via a Chinese carrier. It gets uglier for Apple with each day.

Will Apple become just the latest to suffer what has become a multi-hundred-year history of fleecing foreign business in China? In almost every other country, Apple has been able to sign up the leading carrier to carry its iPhone, effectively by telling the carrier: “You’re just a pipe, thank you very much.” In China, Apple’s being spanked back: “Apple, you’re just a hardware vendor, thank you very much…and we’ll control the App Store and user experience, and have a gazillion OEMs lined up to jump aboard the oPhone!”

So what about Google? Well, the history of foreign business in China suggests you can do well if you’re giving the Chinese something they want — by not only adapting to local market conditions, but also investing in jobs (large foreign companies such as Siemens and IBM have done well this way). But get too big, and you may draw scrutiny. Google is essentially giving away its Android operating system, as a way to realize its grand vision: Mobile phones with efficient web-based apps and browsing are good for Google’s core business of serving web ads. The question is, will this investment by Google really pay off in China, or will Google simply get drubbed again — as it was when going against Baidu, the Chinese search engine? When Google launched in 2000 in China, it quickly became the leading search engine. But in part because of action by the Chinese government, it has steadily lost market share. Baidu now has 75.7 percent market share in search, compared to Google’s 19.8 percent share. The history for most U.S. companies in China has sucked, and there’s no sign it’s gotten any better.