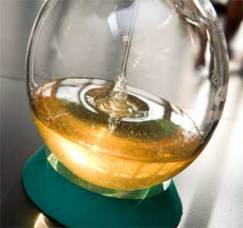 Novomer, a polymer company with disruptive potential, has made catalysts capable of transforming carbon dioxide and carbon monoxide into plastics and marketable chemicals — and now it’s raised $14 million in a second round of venture funding to scale its technology. Based in Boston, Mass., the company, which relies on an extensive patent estate, is one of a very small handful of firms racing to create biodegradable plastics.

Turning carbon gases into feedstock for profitable chemical processes has a chance to help the environment on several levels. Harmful greenhouse gases that might otherwise be released into the atmosphere could be collected and repurposed, sparing the air. On top of that, the compounds the company sells could replace petroleum in up to 50 percent of plastic and polymer retail products, Novomer chief executive Jim Mahoney tells VentureBeat. If you extrapolate that potential out to mass commercial scale, it’s entirely possible that a vast amount of carbon released from coal-fired power plants could soon be permanently sequestered as consumer products that have been sucking up oil supplies for decades.

“We also think these materials will be cheaper because we can make materials that are thinner,” Mahoney explains. Not only will carbon be less expensive to acquire than petroleum for plastics, but less material will actually be needed to make the same structures.

These are pretty lofty ambitions for a company that was still a two-man spinout from a lab at Cornell University as recently as three years ago. But Novomer has since grown to 23 employees and landed two rounds of capital. It brought in a $6.6 million first-round of financing in 2007 co-led by Physic Ventures and Flagship Venture Partners, and including DSM Venturing. OVP Venture Partners joined to lead the recent round.

For now, the company is bringing in revenue by licensing its technology to polymer manufacturers and producing actual materials. For example, its lead compound, NB-180, is a colorless thermoplastic polymer that decomposes into eco-friendly by-products, making it ideal for electronics and ceramics applications, Novomer says. At the same time, it is working with several brand companies to refine its processes and products for broader commercial use. For now, its competition is sparse, with startups like Genomatica, Biolight Harvest and Cereplast also turning to organics to produce oil for plastics like microbes, algae and starches — but not straight carbon dioxide.

Novomer buys its carbon from third-parties, with most of it already coming from industrial and second-hand sources. This part of the business alone could have major implications if cap-and-trade or carbon tax legislation takes hold. Retail companies like Wal-Mart and countless others are already taking carbon accounting along their whole supply chains more seriously in anticipation of policy changes. So just think if all the plastic products lining the shelves at your grocery store were suddenly taking carbon out of the air — it seems like a win so far, especially for Novomer.