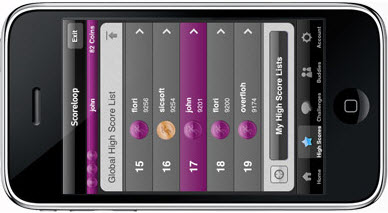 Scoreloop, which develops infrastructure to make iPhone games more social and addictive, has raised a $2.8 million second round of funding.

By “socializing” iPhone games and making them easier to discover, Scoreloop tries to help games get noticed amid the tens of thousands in the AppStore.

Scoreloop, based in Munich, Germany, is like someone who sells shovels to the gold miners during the Gold Rush. It doesn’t have to strike gold itself with a hit iPhone game in order to make money. That’s why Earlybird found the investment attractive, said Roland Manger, managing director at Earlybird, a seed or early stage investor in Europe.

Manger said it’s risky to make bets on game publishers themselves, who may or may not come up with a hit. So Manger said he was looking around for a company that could cash in on the iPhone games boom in a different way.

Scoreloop gives away its development tools to game developers and publishers, who use the tools to create games where players can challenge one another in a competition. When a player sends a challenge to a friend, the player has to use a Scoreloop coin, purchased with real money. Scoreloop also lets game makers recommend or promote games to users who have already bought a certain kind of game, and it lets them purchase virtual goods in games. It also lets friends share high scores with each other.

In July, Scoreloop expanded its business, allowing users to create cartoon-like avatars that they can view in iPhone games or on Scoreloop’s PC-based web site.

So far, Apple itself hasn’t created any mechanisms that makes it easy to spread games to friends in an automated way, as Facebook has done on its platform. If Apple does so, it could wind up competing with Scoreloop, and we know how that battle would end.

In the future, perhaps in recognition of the risk of competition from Apple, Scoreloop plans to diversify to other platforms. Scoreloop chief executive, Marc Gumpinger, said the company may use the money to engage with larger game publishers who need more formal support to use the Scoreloop platform. It may also use the money to diversify to other smart phone platforms such as Google’s Android.

A number of other companies provide social discovery tools for game developers. Those rivals include Ngmoco, Social Gaming Network, Chillinger, and Aurora Feint. Although Scoreloop doesn’t compete with the game developers directly, it’s possible that some major game publishers may develop their own tools to promote their own games in a big company-based game network. In that case, Scoreloop would just have to build better technology to get the big game publishers to use its tools. So far, Scoreloop has more than 500 registered game developers who have so far published 40 games in the AppStore.

Scoreloop was founded in 2008 by Marc Gumpinger, Dominik Westner and Christian van der Leeden. The company has 16 employees.