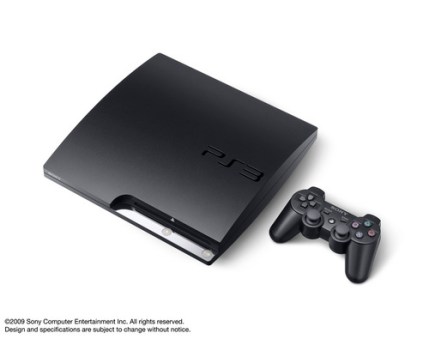 Sony surprised no one today as it cut the price of its PlayStation 3 video game console, which has languished in third place among the console makers since its launch in 2006. It also announced its much-rumored PS 3 Slim, which is a thinner and smaller version that costs a lot less to produce. The Slim will replace the current 80-gigabyte PS 3 at the same price.

The PlayStation 3 price cut, from $399 to $299 for the 80-gigabyte model, effective immediately, should help spur demand for video games and compel rivals to rethink their prices. For five months, video game sales have been in a decline compared to year ago numbers. The need for the price cut was clear, but Sony delayed out of concern that it would hurt the overall parent company’s profits.

The PS 3 Slim is launching on Sept. 1 and has all the same features of the current PS 3, but it will come with a larger 120-gigabyte hard disk. It is about 33 percent smaller and 36 percent lighter than the current PS 3. And it comes with an 120- gigabyte hard disk. Once the 80-gigabyte version of the PS 3 is sold out, it won’t be replaced. Once that happens, the PS 3 Slim will be the only model at the $299 price.

As for those who say Sony should have cut the price earlier, Peter Dille, head of marketing for Sony Computer Entertainment America, said in a phone call that Sony has made calculated pricing decisions based on its business model, not on the economic environment or competition.

Publishers of video games are sure to rejoice at the lower prices. But the industry has to think long and hard about the damage that has been done by protecting profits rather than serving consumers during a time of a major squeeze on pocketbooks. While console sales have fallen, gamers have turned to cheaper options which include 99 cent iPhone games, Facebook games, and free web games where gamers can play for free and buy virtual goods in 25 cent installments.

Sony once enjoyed staggering numbers itself. Its PlayStation 2 sold well over 100 million units. But now in its fourth year, the PlayStation 3 has sold just 23.7 million units. That’s way behind the Microsoft Xbox 360 at 31 million and the Nintendo Wii at 52 million.

Sony stands a chance of gaining market share with its price cut, but Microsoft and Nintendo may respond by lowering their own prices. The Wii sells for $249, while Microsoft’s various models sell for $199 with no hard drive (Xbox 360 Arcade), $299 for a 60-gigabyte model (Xbox 360), and $399 for a 120-gigabyte hard drive (Xbox 360 Elite model).  Rumors of the PS 3 Slim and a price cut have been circulating for months, since it was painfully obvious how overpriced the console was.