The app revolution that started with the iPhone could spread far and wide to all of consumer electronics. That’s one of the lessons that Sony Electronics executives say they have learned from Apple’s success with the AppStore.

You could, for instance, access online stores to download just about any app you want for your consumer electronics devices, from TVs to clock radios. At a press dinner in San Francisco Tuesday night, Sony executives said it’s conceivable that a variety of devices could access downloadable apps from a single online store.

That’s a pretty big acknowledgement. Sony is a proud company that once dominated consumer electronics. But it now faces threats from everywhere, even computer makers such as Apple that are increasingly muscling in on consumer electronics turf. The idea that Sony could learn from Apple is a pretty foreign concept.

“A clock radio could be more than a clock radio through app downloads,” said Stan Glasgow, president of Sony Electronics in the U.S. “A company like Sony has to do a product like that and you will see us doing some of those products in the near future. We don’t have an app store at this point, but it is very possible.” 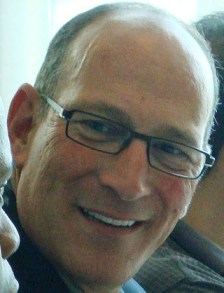 This consumer electronics app revolution is already starting through widgets, or small programs that can be embedded in web-enabled devices to add new applications. The Yahoo Widget Engine (above) is being adopted by Sony and a number of other TV makers. With it, web widgets can be embedded in TVs. With a remote control, you can click on the widgets and surf web sites from YouTube to Hulu.com. Glasgow (right) said Sony’s newest TVs will have something like 29 different web services available as widgets, accessible via simple clicks.

That could eventually evolve into the notion of thousands of apps, where you could use the web to shop at an online store and then click to download apps that are stored on your consumer electronics device. That means the device will need some kind of storage and computing power. On top of that, consumer electronics companies like Sony will have to convince makers of third-party apps that it’s worth making apps for the devices.

In another concession to Apple’s success, Sony announced six new audio electronics products yesterday that are compatible with Apple’s iPod music players. The devices, priced from $199 to $799, have plugs that can accommodate iPod players, so you can carry your iPod from device to device and play your own music. The Sony Altus audio devices (below) have wireless connections so that you can wirelessly beam your music from a player to other speakers in your home. 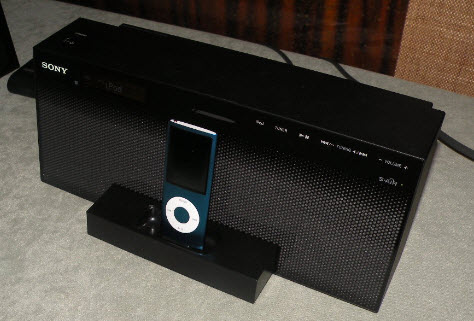 “We are treating the iPod as one more format to support,” Glasgow said. “We are not ducking that. We recognize has Apple has a significant presence in this country. We still build our own Walkman product. The iPod is a format. We are adopting it. I expect us to gain market share. Sony can do great things in personal audio. In this one segment of personal audio, Apple has got us. They have won that for now.”

Glasgow is one of the more outspoken Sony executives who periodically holds open-ended press dinners.

Glasgow and Sony executive Mike Fasulo covered other topics besides Apple at the dinner. They said they are cautiously optimistic that consumers are going to buy more consumer electronics during the coming holiday season than they did a year ago. Consumers are likely to spend a lot more time researching purchases online, but they aren’t as shell shocked by the recession this year as they were last year. Month by month, consumer electronics has been making a slow comeback, they said. However, they believe the recession has permanently changed consumer behavior to focus on value.

For instance, there are more smaller flat-panel screens being sold now than a year ago. Those TVs cost less and may serve as the second digital TV in the home. But they believe there is pent-up demand among consumers who have growing wish lists for new devices. Sony will add value-based products, but it isn’t likely to offer the lowest-price devices in the market. That may explain why another division of Sony cut the price of the PlayStation 3 by $100 yesterday.

They think, for instance, that the launch of Windows 7 this fall could spur some new demand for computers starting in October, Glasgow said. Netbooks are also likely to be big sellers, as are Blu-ray players, whose prices have fallen 47 percent this year. Some categories such as digital cameras and camcorders are already exceeding expectations heading into the fall season.