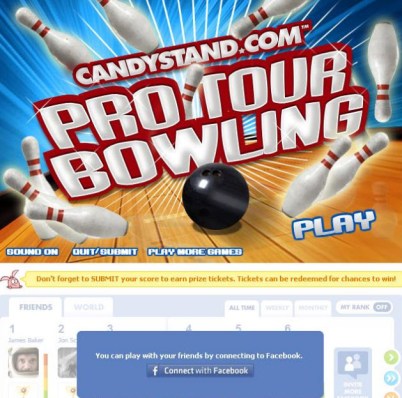 Old game portals have to keep up with the times by socializing their games. That’s why Candystand.com is integrating Facebook Connect today to turn its site into a gaming social network.

The game portal has 171 free casual web games with more than 5 million unique monthly visitors. By adding Facebook Connect, players will be able to invite their friends to play and challenge them to beat high scores. There are other big casual web sites out there, from Miniclip to Addicting Games, but none has moved so fast to embrace Facebook Connect to socialize an existing site.

The site, owned by New York-based Funtank, is one of the oldest and most successful family-friendly game portals. It was founded in 1997 by the LifeSavers candy division of Nabisco. It was sold to Kraft Foods in 2001 and then sold again to Wrigley in 2005. Funtank spun out of digital ad agency WDDG and then bought Candystand.com from Wrigley in 2008 for an undisclosed price.

The site gets more than 10 million visits a month, and consumers stay for about 13.8 minutes per visit (according to market analyst comScore), playing such games as virtual billiards. There are a variety of sports, arcade, card, puzzle and multiplayer games on the site.

But Scott Tannen, president of Funtank, said in an interview that the company believes it can increase the time people spend on the site by making the games more social. Most of the titles are free Flash-based games for single players but could become social if players use Facebook Connect to first invite their friends into the game portal and then challenge them to beat their high scores in games.

This way, the company can tap into Facebook’s infrastructure and its audience of more than 250 million people. Visitors to Candystand.com can log in with their Facebook credentials, invite friends to challenges, and post their scores in real time on their Facebook walls. They can enter site-wide tournaments. Individuals have the ability to choose whether they want to play anonymously through a user name, or use their real names via Facebook.

Candystand.com’s games generate revenue via advertising. The ads run on the site or inside the games, which means the ads are baked into the game play. Advertisers include the World Famous Harlem Globetrotters, Toyota, Disney, Wrigley and the Coca-Cola Company, and many others.

About 70 percent of the site’s audience already uses Facebook. For now, the games are playable only on Candystand.com, not on Facebook. Funtank doesn’t want to be entirely dependent on whether a site such as Facebook is available or not.

About 80 percent of Candystand.com’s games come from external game developers. Funtank has 13 employees and it is self funded. Besides adding Facebook Connect, the company is also adapting to the new age of games by publishing iPhone games and PlayStation Portable games.