A new web directory of sports teams and athletes called Fanbase has launched today, aiming to mobilize fans around pages of any team, from football to golf at any level, from professional to college and high school.

It is co-founded by Nirav Tolia, the entrepreneur who led the fast-growing product review site Epinions during the last Internet boom — a company that experienced a wild ride of boom, bust, and then partial redemption — all amid substantial controversy, including lawsuits.

“We want to be the definitive source on all athletes,” said Tolia. He and his team have been working on Fanbase for 18 months. It is backed with $5 million from Silicon Valley venture capital firm Benchmark.

It has made a wiki-like site, letting sports fans review and update web pages about their favorite teams and players — letting them upload photos, videos and text entries. Fanbase is integrating best practices in social media. For example, it lets you sign in using Facebook Connect. Once you sign in, you can tell all of your friends on Facebook who were athletes in college or professional sports, and who thus have a profile on Fanbase.

The site contains information on 21,000 teams and more than 1.73 million athletes (1.5 million college athletes, plus all professional athletes from major league baseball through basketball, football, and other sports such as Lacrosse — from their founding days). The number of pages will increase over coming months, in part as fans add to them, said Tolia in an interview Sunday. It will eventually include all high school sports athletes and teams, for example. An example of a profile page, of Dallas football quarterback Troy Aikman, is below

Fanbase wants to make money by selling advertising, and paraphernalia such as T-shirts, he said.

We’ve covered Tolia’s history at Epinions, including the ugly split with his founders after the last Internet bubble burst, but also his perseverance to go on to sell the company — under a different name, Shopping.com — to eBay for a profit to investors. He was accused of lying on his resume, for which he has apologized, saying it was a mistake of youth and that he has learned his lesson. Benchmark, for one, has forgiven him. Bill Gurley, an investor from Benchmark Capital who backed Epinions,  and who is now backing Fanbase, has steadfastly defended him.

Tolia (pictured left) and co-founder Sarah Leary spent six months as Entrepreneurs-in-Residence at Benchmark until Jan., 2008, when they left to set up offices in San Francisco. They recruited a third co-founder Prakash Janakiraman, an engineering manager at Google Maps who Tolia and Leary had worked with earlier at Epinions.

Tolia said the trio were looking to build a vibrant community site, and settled on sports because of the passion of its fans. “Passion is the single most important ingredient in any live community,” Tolia said.

He said the sports market is massive, with billions of people interested in it. But it hasn’t been dominated by incumbent portals such as Google or Microsoft. ESPN and Yahoo Sports are the leaders in sports online, but these are traditional media web sites, with high-quality editorial where fans go mainly to get news. However, there is no sports equivalent to the Internet Movie Database (IMDb), the popular directory of movies and actors, which Tolia said is the real inspiration for Fanbase. “This is not the ESPN killer,” he said. “Like Wikipedia is to the New York Times, Fanbase is to ESPN.”

The Fanbase team has spent the last year digitizing, extracting and structuring information from thousands of college media guides — something that hasn’t been done before. If you were a swimmer in a college swim team ten years ago, chances are you haven’t been able to see your team online until now.

Fanbase launched publicly at the end of June, and are on track to 500,000 unique visitors this month, with no promotion, says Tolia. Users have made 60,000 contributions. 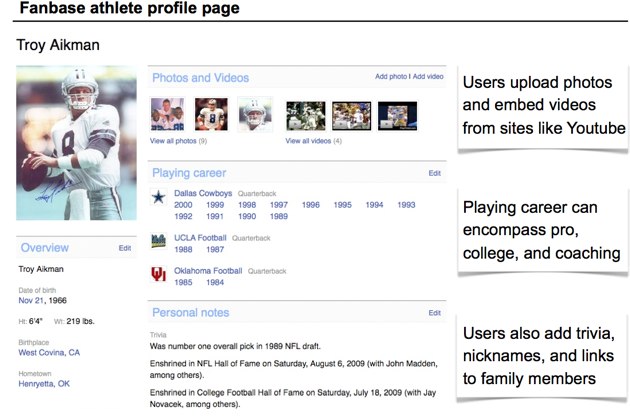