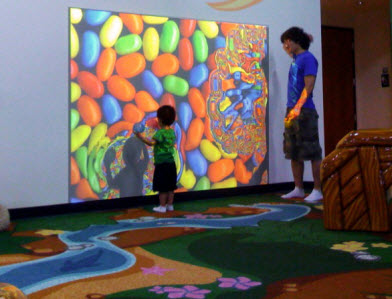 If you want to see what video games might look like in the future, check out these pictures of the Child’s Play activity center in Las Vegas. The games blend a real environment with game images projected onto a wall. Kids can interact with the GestureTek WallFX interactive display system by using gestures.

The environment is courtesy of GestureTek, a Sunnyvale, Calif.-based company that makes control systems that use cameras or other sensors to detect your movements and then translate them into a game. While it may not be a high-volume application, the display system is certainly a glimpse at the future of gaming. It’s cool how the wall blends in with the rest of the room. 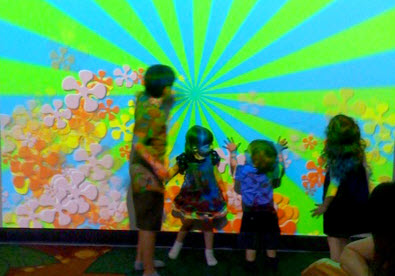 The system has 25 games and special effects that are displayed via a ceiling projector on a 6-foot by 7-foot special effects wall. Kids interact with the system by waving their arms or moving their bodies. A camera can capture their full-body motion.

As with the Nintendo Wii, part of the idea is to get kids moving around and exercising while they’re having fun. The GestureTek technology packs a lot of technology together, so don’t expect to see it in your home soon. But it’s definitely part of a trend towards gesture-based interfaces. Nintendo started the gesture-control movement in 2006 with the launch of the motion-sensing Wii. Microsoft is launching Project Natal, a full body motion-sensing system for the Xbox 360, rumored to be coming in 2010, and Sony is doing its own gesture-control system as well for early 2010.

Rich Hilleman, chief creative officer at Electronic Arts, said at the Hot Chips conference in Palo Alto today that gesture-control systems are great for shifting the fun of a game from inside the screen to outside the screen, where the fun part is watching your friends interact with each other in a social way. In the past, gaming has been much more immersive, best played in a dark room by yourself. But gesture-based gaming will likely broaden the market for video games beyond those who call themselves gamers. Hilleman said these systems are just getting started and investments in user-interface technology have a bright future. 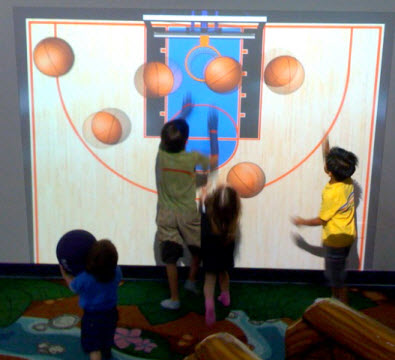 The Child’s Play center was started six years ago and recently added the GestureTek system. It has 500 members who pay a monthly fee. It’s for kids up to age 10. Jeremy Childs, owner of the center, says his goal was to keep kids coming back by providing them with a new experience through the wall every time they come.

GestureTek has delivered more than 4,000 different systems that entertain people in malls and other places. This new WallFX system — which is in 2,000 locations — resembles the one provided by Reactrix Systems, which went out of business last year after raising tons of money. GestureTek’s investors include Vivid Partners, EdgeTech, Telefonica and NTT Docomo.

GestureTek licensed its patents to Reactrix. GestureTek has been around since 1987 and has under 100 employees.

Come see the most promising new technologies unveiled for the first very time at DEMOfall 09 this September 21-23 in San Diego.  VentureBeat readers may register to attend the conference at a special 20% discount off our regular rate.  Register now at this link.