It can be a real challenge for me to keep track of how many cell phone minutes I’ve used. Sure, most of that data is available on mobile carriers’ websites, but you have to be dedicated to check in on a regular basis, and even then interpreting the data can be a challenge. For example it took months before I figured out that I consistently exceeded my allotted number of text messages (yes, I’m pretty dense and lazy when it comes to my bills, but I doubt I’m alone).

Now a startup called PageOnce wants to make the process much easier with an application called the Cell Minute Tracker. The Palo Alto, Calif. company released an iPhone version of the application a few months ago, and today it’s launching a BlackBerry version, which looks pretty similar. Once you enter your account information, the tracker presents an easily-digestible chart summarizing your plan, including how many days you are into the cycle, how many minutes you’ve used, and how many rollover minutes you have. There’s a free version of the app, but you’ll have to pay $2.99 if you want to monitor each person on your family plan, and receive email alerts when your bill is due or when you go over your usage limit. 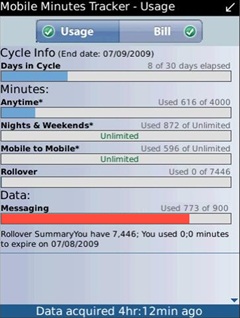 Chief executive Guy Goldstein notes that the BlackBerry version doesn’t just bring the Cell Minute Tracker to a new set of smartphones, it also dramatically expands the number of mobile carriers covered — in the United States, for example, it was previously limited to AT&T (because AT&T is the exclusive carrier for the iPhone), but the tracker now supports “all the major carriers in the US.” The iPhone version has been downloaded hundreds of thousands of times, Goldstein adds.

This app seems like a smart variation on PageOnce’s big mission, which is to provide a single service that makes it easier for people to manage all their online accounts.