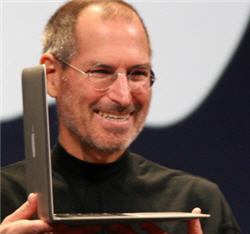 Apple’s MacBook Air will soon be challenged on its super-slimness, by Windows-powered computers from Asus that may lack Apple’s aluminum-cased pizazz but will cost a lot less. Welcome to the world of co-opetition: Asus manufactures components for some of Apple’s MacBook and iPod products.

Digitimes reports that Taiwan-based Asus, maker of the low-cost Eee PC netbook, will begin selling two ultra-slim notebooks on September 7th in mainland China, Taiwan, and parts of Europe (no word yet on if or when we’ll see these in the US). The company’s president, Jerry Shen, has already claimed that ultra-thin models will make up 10 to 20% of the company’s Q3 notebook shipments.

Asus’ new models seem to be the first to use Intel’s new 45 nanometer Celeron chips, code named Penryn, which can pack the same circuitry into a smaller space than the previous 65 nanometer technology. One cool thing about 45 nm chips: Many components are smaller than the wavelength of the light used to etch the chips. That requires lots of engineering trickery in the production process. Penryn chips also increase battery life compared to their predecessors.

Engadget estimates the price of Asus’ new models will run between $700 and $1,000. A thousand bucks is only two-thirds the price of an entry-level MacBook Air. Apple uses a custom-built Intel Core 2 Duo CPU that’s less powerful than the chip in most high-end notebooks, but more powerful than the Intel Atom chips used in netbooks. The new ultra-slims should be close to the MacBook Air in performance, but several hundred dollars cheaper. There’s no simple logic to explain it, but people like slimmer notebook computers. Possibly enough to loosen their recession deathgrips on their wallets and splurge on a skinny new toy.

The Digitimes story notes that Acer and MSI are expected to make similar announcements of ultra-slim netbooks shortly.