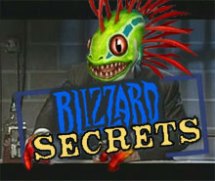 Even a week after Blizzard’s extravagant BlizzCon, the buzz is still ringing in ears of anxious gamers. I am already squirreling away and saving up a secret cache of PTO days in preparation for the releases of StarCraft 2, Diablo 3, and World of WarCraft: Cataclysm. But what lies behind all the starry announcements and reveals?

I can’t help but make parallels between Blizzard and Willy Wonka’s chocolate empire. Both are successful, wondrous and sometimes just downright mysterious (does that mean Mike Morhaime is like a Gene Wilder-esque force of nature?). Throughout my attempt to find out about the brilliant minds behind the gates of their Irvine hitmaker factory, I discovered some juicy, delectable tidbits.

I present to you Blizzard….Secretsssss (though I’ll admit, these don’t have quite as much ring to them as Patrick Stewart’s).

Blizzard’s gamemakers are mass consumers of pop-culture. There is not a movie, game, book, comic that they don’t devour. This digestion process often powers up some light bulb moments. Alex Afrasiabi, designer and quest overlord on the WOW team, and Andy Chambers, creative director currently working on StarCraft 2, shared their stories about how some pop culture got injected into their games:

I went home started typing the letter to Metzen — it was about heroes in our game and what direction we should start taking. That was kind of the birth of Wrath Gate. That one Iron Man trailer moment became a 2-page letter to Chris Metzen. I wanted to imitate the whole “Whoa, what the hell did I just see?!” moment.

Andy Chambers: For StarCraft 2, there are certain films that really changed the way we saw the world. Predator and Alien were the two films we saw and were like, “Wow! Sci-fi can be that cool.” They’re the sort of things that seeps so far into your brain.

We always find ourselves quoting or referencing parts of the films. And of those two, I think Alien is the one we probably hit the most. It’s when sci-fi took a leap into the modern age. You have Star Wars, but that’s sort of a fairytale version of sci-fi. The Alien universe is grubby, and they use spanners, and there’s steam shooting out everywhere.

From Predator, we looked at how you get a team of bad-asses and make them all individuals rather than making them seem all very generic. Over half of that film is actually more about the interplay between the characters in the troop, than the fact of having some alien running around blowing heads off.

One of the main ingredients of Blizzard’s success is not just figuring out what people want to play, but how they play. Talking to the developers, including Jay Wilson (lead on Diablo 2), I can’t help to think that I was chatting with anthropologists outfitted in elbow-patched tweed blazers, reeking of pipe tobacco.

Despite Blizzard’s casual and quirky office culture, there’s a hint of old academia in the air where research is the key to success. By studying patterns and use cases, Blizzard developers begin to author their own brand of specialized gamer-psychology.

Here, Jay and Andy give examples of the philosophy behind a few game decisions.

Jay Wilson: One of the first things we did with the monk was figuring out where he was going to be in the world. We have a whole history of where he came from. He has this regimen lifestyle, 1,001 gods he worshipped, and a giant tattoo on his back that takes an entire lifetime to complete. We really consider that to be essential before we can actually build the character model.

When we say “monk,” there’s an expectation of what the gameplay will be. That is matched; you get what your expectation is. It should not be “Oh, I thought he was going to be a martial arts character…but you got him throwing fireballs!” We don’t want that disconnect. It has to make sense.

But we also want you go, “Oh, this is not exactly what I expected” when you see the image of him. We want there to be a little surprise there. That’s why we didn’t go with an Asian monk. We wanted to experiment with Asian philosophy yet create a character that’s familiar yet original at the same time.

When people want to do something really original, which is a good instinct, they don’t usually think, “But how are we going to make it relatable?” You’ve got to do both: give people something they can instantly digest but yet, at the same time, surprises them. Very hard to do. You can do one or the other but doing both together is difficult, and it’s one of our primary goals.

AC: One of the things we learned in StarCraft 1 and Warcraft 3 was that having a story is cool. But, it’s not necessarily the best place to do an awful lot of it in the missions. You got a lot going on, so if people are coming up to you telling plots of story, you might not be in the best place to fully assimilate that.

That is why we got the idea of injecting that in between the missions more. We’ll have spaces to let players get into the story more, talk to the characters, and still keep the missions far more focused on the action itself.

So it is in the format of brief-mission-brief-mission but we give you an environment to run around and absorb story in between missions if you want to. And if you just want the next briefing and the next mission, you can do that too.

We’re trying to serve our two polar types of players equally well. We’re very aware of the different types of players: there are some people who just love the lore, they like digging around and we definitely have them in mind.

But at the same time, design-wise, we’re very conscious of the fact that we don’t want to put barriers in the way if somebody wants to get in on missions. While you can dig up and explore the story elements, they’re not vital things. We made sure that we put vital things in front of you through the course of the mission so your RTS player will get the main hits of the story.

Every quarter, Blizzard holds a Show-and-Tell for all of the development teams. It sure sounds endearing, and it certainly whisks me away back to the third grade when milk and cookies are involved. But I would imagine at a place like Blizzard, it would be absolutely nerve-wracking.

With Blizzard’s company mantra of “it’ll be ready when it’s ready” and soft, blurry deadlines, I would imagine people to be fearless about openly criticizing the work of their peers. Yet, it is that exact kind of critique that each team welcomes with open arms.

AC: You really are actually playing to the worst crowd ever because it’s all full of developers and technical artists. If there is any flaw, they can spot it. But if you can get them cheer and applaud then you really know you got something good.

We call these quarterly meetings Candy Day. It’s really rewarding because most of the time you have your head down doing your own project. When we first showed off the StarCraft 2 game engine and some of the units in action, nobody else in the company has really seen it before.

Remember that time at the invitational in South Korea when we showed the Protoss? We did that at the Show-and-Tell in the company just prior to Korea. And that was the litmus test; if you can make the whole company go “Oh my fucking god” then you’re like, OK, then this will work.

JW: These Show-and-Tells help us get feedback from other experts. We had debates about the art style, and one of the reasons why we had a lot of confidence and thought we made the right choice is because we have been putting the game in front of Blizzard people for years. The art style we arrived at was the direct result of that Show-and-Tell feedback.

A lot of what we put out initially, nobody was excited about. It was closer to what people were saying we should do, but no, we went that direction before, and trust us, it didn’t work. We’re really friendly with one another but we are competitive too, we all want to do really well. So we look at those quarterly events as a point to try to one-up each other.

That also has a great effect on making our games better. I remember when StarCraft 2 first showed, we were like, “Aw man, we are never going to top that!” So we went right to work.

Blizzard developers eagerly anticipate the future and embrace competition. With the competition heating up and Blizzard working on all three of their established brands (and a new MMO!) all at once, are they concerned that another development team will claim their crown?

JW: One of the reasons why it’s so easy for us to get along amongst different development teams is because we don’t really have animosity towards one another. We wish the best for them. People always ask us, “Are you guys nervous about this other MMO coming out and that it might be good?” No, we hope it’s good, we want to play it. We like MMOs. We like dungeon crawlers and RTSes. We want people to make them, and make them well. Secretly, I think we really wish other developers would one-up us so we can learn. So any time somebody does something great, wow, hats off.

I think as soon as there is no longer room for innovation within a genre, that genre will die. I do think the definition of innovation changes from person to person. A lot of the player base, their desire for innovation is that they want something completely new and never seen before all the time.

The truth is, if you had a choice between executing really well or innovating really well, you really rather execute well. A poorly executed, innovative game is not a good game. A poorly innovated, well-executed game is a great game. What you hope is that every now and then you get one that’s both but those struck like lightning. They’re not something I think even a great developer can predict.

But the bottom line is: We want that game to come out. We hope we’re the ones who put it out, but we’re equally as happy if someone else does.