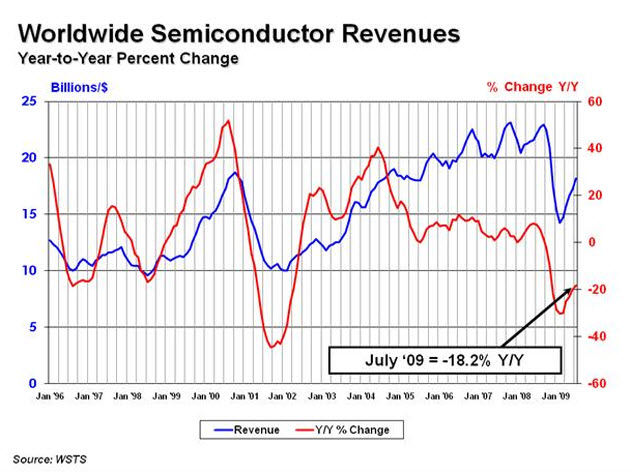 Global semiconductor sales rose in July for the fifth consecutive month on a month-to-month basis, according to the trade group Semiconductor Industry Association.

Chip sales are a bellwether for the tech economy since chips are used in everything electronic. July sales were $18.3 billion, up 5.3 percent from June sales of $17.2 billion. Sales increased in all major geographic territories.

The year-over-year decline has moderated as the year has progressed. In the first six months of 2009, sales were down 25 percent from a year ago. For July 2009, sales were 18.2 percent lower than July 2008. Sales numbers are based on a three-month-moving average of global chip sales.

George Scalise, president of the SIA, said the sales improvement in July reflected improving demand in consumers, as products in netbooks (web-surfing computers that are smaller than laptops) and cell phones are leading the recovery. Enterprise sales are still relatively slow, but there is evidence of a return to seasonal buying patterns.