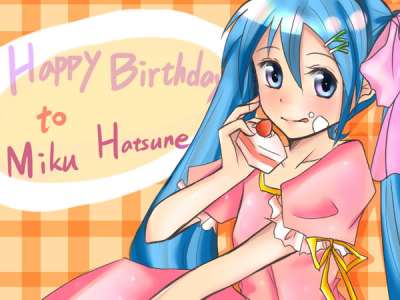 For the Japanphiles, the name Hatsune Miku is very familiar. Celebrating the 2nd anniversary of her creation, her influence is everywhere on Nico Nico Douga, Pivix, Oricon album charts, Sega PSP games and anime in the near future.

Miku’s success stems from the Internet’s love for the synthesized voice program VOCALOID where Japanese voice artist Saki Fujita lend her talents. While these programs are generally used for speech synthesis, users looked at cute, blue-haired mascot like a Japanese pop idol and began to use her voice for a number of musical works.

Internet success on Japanese video Web site Nico Nico Douga eventually turned out multiple hit singles and claims to three of the top five most favorited video on the site. Earlier in the year, Sega released Hatsune Miku’s first game of her own on the PSP. The game was a success selling over 100,000 copies in its first week, mostly thanks to her massive fan base.

The success to Hatsune Miku has also trickled the people behind some of the most notable Miku singles. Composers RYO and Supercell, along with singer Nagi (formerly known as Gazelle) all had their roots in performing these great Miku songs with great reception from thousands of viewers on Nico Nico Douga. Their collaboration helped released a Hatsune Miku compilation album, selling 20,000 copies during their debut and listed 2nd on Oricon’s daily sales chart. Ryo, Supercell and Nagi’s latest success story comes in the form of producing the ending theme to ongoing anime Bakemonogatari, entitled “Kimi no Shiranai Monogatari (Your Unknown Story).”

Two years later, many iterations of VOCALOID characters joined the family collectively continuing the tradition of user-created music. As for Miku, an anime based on a spin-off re-imagining featured in Black Rock Shooter was recently announced during the 2009 Animelo Summer concert. The anime is slated for showing during the 2010 spring season.

The impact of Hatsune Miku has broken down walls in being one of the world’s first virtual idol. Songs composed by anyone, uploaded by anyone, riding on a fanbase created by everyone. The success of this blue-haired sensation wasn’t planned to explode, but it eventually grew into an outright inferno. Happy birthday Hatsune Miku, keep on being the world’s number one princess of virtual pop idols.