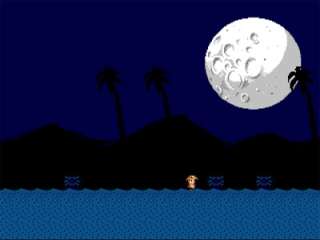 I absolutely love action games of any kind: Half-Life, Metroid, shmups, Kaboom!, Gunstar Heroes — you name it, I love it. So it may be a little surprising when I say that the obscure, arcane PC RPG NetHack is one of my favorite games of all time.

It takes forever to learn the intricacies, but the sheer unpredictability of its randomly generated levels makes for some of the most engrossing and fun situations I’ve had since I started playing games.

Imagine how excited I was, then, when I heard that someone had made a side-scrolling action game in the same procedurally-generated style as NetHack. And that it was free.

Spelunky is made by Derek Yu, an artist and game designer who became famous around the indie scene after co-developing Aquaria, a game that won the IGF’s 2007 Seumas McNally Grand Prize. He developed Spelunky, however, mostly on his own using Game Maker.

In Spelunky you play as a cute midget-Indiana Jones type character, delving into what appears to be an old mine/cave network in search of loot and all manner of apparently very lost damsels in distress. Your starting equipment is made up of a limited number of bombs, for blowing holes in stuff, and ropes for climbing into and out of deep mine shafts.

Not surprisingly, you use your whip to defend yourself against typical enemies like bats, snakes, spiders and, er, cavemen. I guess it makes sense. You navigate each level of the caves looking for gold, gems, upgrade items and damsels in distress, eventually heading tothe exit at the bottom of the level.

Occasionally you’ll come across a Golden Idol, and picking it up predictably sets off a huge rolling boulder that crushes everything in its path. 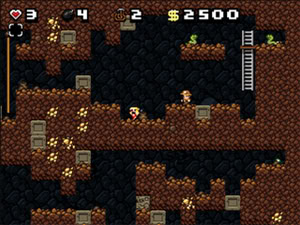 It all sounds like a yawnfest when I describe it like that, doesn’t it? Well, the genius of this game is much more subtle than its surface features. Every level is randomly generated. You never quite know what you’re going to encounter.

There are lots and lots of upgrade items, and I won’t tell you all of them here, but they include parachutes, glasses, teleporters and shotguns. Every one of these items affects your game in some huge way, but you never know what you are going to stumble on in your travels.

All of the characters, items and obstacles interact with each other in unpredictable and exciting ways, which is what keeps the game so engaging all the time. When you pick up the Golden Idol off of its platform, for example, the boulder comes tumbling down and bores a long tunnel in it’s wake as it barrels through the cave.

I discovered, however that if I managed to get underneath the Idol chamber, I could blow up the platform itself from below and the Idol would simply fall into my greedy, waiting hands without setting off the boulder.

On the other hand, in a different session there was a giant, nearly indestructible spider blocking my way to the exit and it wouldn’t budge. So I trekked back a little ways, picked up an Idol, quickly climbed a ladder to get out of the way.

Just as I was hoping, the boulder plowed right over the spider’s stupid face and I could casually stroll through afterward unharmed. 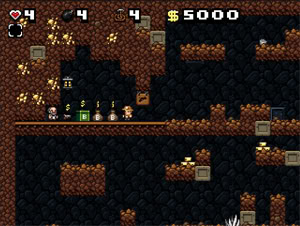 This is the same kind of crazy, chaotic happenings that made NetHack so fun, except this time it’s presented using fun platforming instead of keyboard command memorization and all-text graphics.

There are so many weird things to encounter and problem-solve your way through, and the discovery is half the fun.

Keep in mind, though, that this game is brutally hard. Health is extremely difficult to come by. In fact, it might take you a while to figure out how to even acquire health, because the game certainly won’t tell you.

You’ll probably find that you’ll die and start over a few times before you even get to the second level. Don’t let this perturb you though. This is how the game is supposed to play; you’re not playing it wrong by dying a lot.

One time I threw a rock at a wall and it bounced back with startling momentum, hitting me in the face and killing me. Embarrassing, but hilarious.

You owe it to yourself to play this game. How many other games let you choose between saving a lady or dropping her in a pit so you can pick up a sweet jetpack?