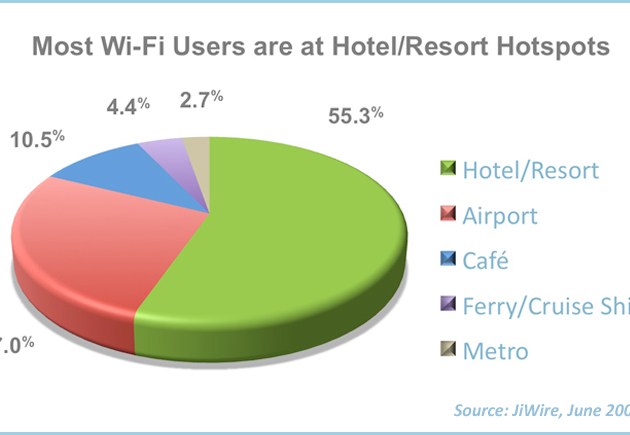 The takeaway from the PDF-format report: Wi-Fi users are, as you might expect, wealthier and spendier than average. There’s a strong business traveler demographic. Apple’s iPhone and iPod Touch make up nearly 100% of the non-laptop audience for Wi-Fi. 38 percent of hotspot users have made a purchase over a wireless network.

But contrary to the coffeshop stereotype, far more Wi-Fi hotspot users connect from hotels and resorts, not cafes or airports. The breakdown is 55% hotel or resort, 27% airport, 10% cafe, 8% somewhere else, such as a cruise ship or public transit.

Still, there’s a gaping hole in JiWire’s report: How many Wi-Fi users are there? JiWire happily gives out its own count of 20-plus million unique visitors per month, observed on the 30,000 networks worldwide for which JiWire serves ads. The report includes a colorful chart that says in the first six months of 2009, the number of Wi-Fi users grew 18.5 percent. But from how many to how many was that growth? It’s the first number a businessperson would want to know about the Wi-Fi ad market.

JiWire is being honest in that backhanded manner of tech startups. They don’t mention the total size of the market because they don’t know what it is. The 18.5 % growth stat, they confirmed to me, comes from their own network.

But how much of the Wi-Fi ad market does JiWire own, and what’s the total size of that market? JiWire’s report says, basically: “We don’t know.”