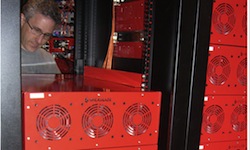 Backblaze, a startup that offers what may be the easiest way to backup your files, did something cool and surprising today. Apparently, it has developed a cheap way to build storage — but instead of trying to sell that technology, it has published the designs for anyone to use.

The Palo Alto, Calif. company developed the “Backblaze Storage Pod” out of necessity, says chief executive Gleb Budman. Since Backblaze’s goal is to backup large amounts of data for its users while charging only $5 a month, finding storage at a reasonable price is crucial, and none of the existing options out there were cheap enough. For example, he says, storing a petabyte of data (that’s 1,000 terabytes) using Amazon Web Services would cost $2.8 million in fees over three years. On other hand, by building a set of Backblaze pods, which store about 67 terabytes each, you could store the same amount while paying only $117,000 for hardware. (See the cost chart created by Backblaze below.) 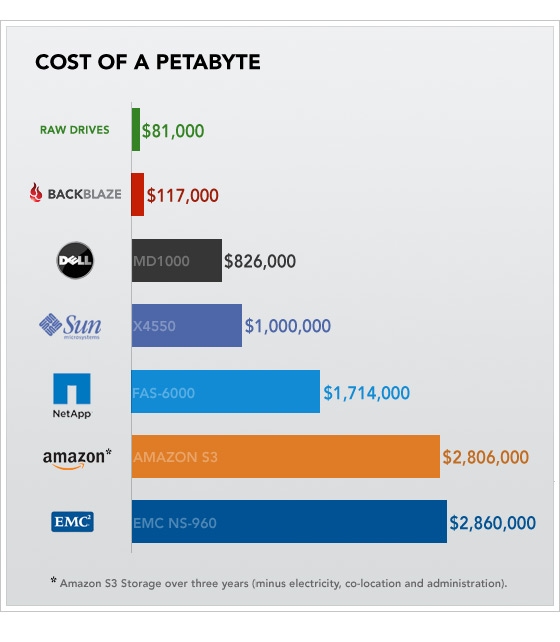 If these pods are so cheap and useful, why is Backblaze just giving the designs away for free? Simple, Budman says: “We’re not a hardware company.” Backblaze built its own pods out of necessity, but its business is all about delivering a good backup experience, not selling devices. And hey, if another company can build more pods and sell them at a reasonable price, Budman says he’d be happy to buy them. (It’s an interesting comparison to Amazon, which had to build its own cloud computing infrastructure for its e-commerce business, then decided to rent that infrastructure to other companies.)

Here’s how Backblaze describes its innovation:

We had two primary goals: Keep upfront costs low by using consumer-grade drives and readily available commodity components and be as power and space efficient as possible by using green components and squeezing a lot of storage into a small box. The result is a 4U rack-mounted Linux-based server that contains 67 terabytes at a material cost of $7,867, the bulk of which goes to purchase the drives themselves.

Now, I don’t have even a fraction of the hardware expertise needed to assess Backblaze’s designs, but if they do everything the company says, the pods may be a promising avenue for hardware manufacturers. Of course, you’d probably want to add your own features and services, since the designs are available to everyone.

And hey, if no one takes Backblaze up on the offer, it’s still a fun way to get publicity.