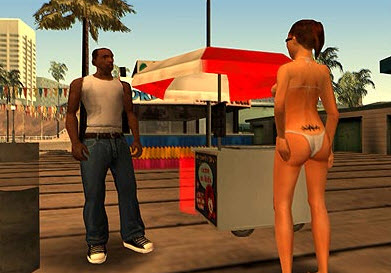 In that incident, developers at Rockstar Games included a hidden sex scene in their hot-selling Grand Theft Auto: San Andreas video game. The scene (right) wasn’t playable in the game until a hacker released a tool that unlocked it. When word got out about the “hot coffee mod,” it caused a flurry of controversy.

The company first claimed the scene was the work of hackers, and then it discovered the scenes were inadvertantly left on the game disks by the Rockstar Games developers. Parents were not pleased that the scene let the hero of the game accept an invitation for hot coffee from a bikini clad woman and  then engage in sex in her apartment. It led to a product recall and the tanking of the company’s stock price. About a billion dollars in market capitalization evaporated, but investors sued when they discovered that company officials had made questionable statements during the price collapse. The incident was one of the factors that led to a complete overhaul of the management team.

Take-Two said it will pay $20.1 million to settle the lawsuit. Of that amount, the company’s insurers will pay $15.2 million while Take-Two will pay $4.9 million. The settlement also applies to a consolidation of lawsuits related to  historical stock option backdating practices.

“We are pleased to have reached this settlement, which represents another important step forward for the Company,” said Strauss Zelnick, chairman of Take-Two, in a statement.Yes, I have to agree. Anytime you don’t have to talk about hidden sex scenes with your investors anymore, that’s a step forward.

The company also reported its quarterly results today. For its third-fiscal quarter ended July 31, New York-based Take-Two reported a loss of $55.5 million, or 72 cents a share, compared with earnings of $51.8 million, or 67 cents a share, a year ago. Revenues fell 68 percent to $138.6 million from a year ago. The big difference is that Take-Two had Grand Theft Auto IV revenues last year but it had no big hits this year.  Excluding one-time items, the company reported a loss of 66 cents a share. Analysts were expecting a loss of 68 cents a share and revenues of $125 million.

Take-Two has delayed some big games until 2010: Red Dead Redemption, BioShock 2, Max Payne 3 and Mafia II. But it is launching some key titles this fall, including Grand Theft Auto IV: The Ballad of Gay Tony (downloadable content), Borderlands, Beaterator for the PlayStation Portable and iPhone, and Grand Theft Auto IV: Chinatown Wars for the iPhone and PSP.