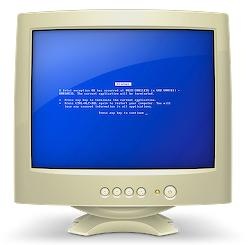 There’s a big bug in Windows 7’s first non-beta version, which will be available for download by some users tomorrow. The good news: It’s unlikely to bite you, and there’s no indication it loses customers’ data. But there’s potentially bad news if you have multiple disks or disk partitions. You may get a visit from Windows’ Blue Screen of Death.

Here’s how it works: Windows has a utility program called CheckDisk — CHKDSK.EXE for old-timers — that checks disk drives for corruption and can fix many disk drive problems. In Windows 7’s first release, it will run OK on your main hard drive. But if you run CheckDisk to clean up a secondary disk or disk partition, CheckDisk will allocate all of your PC’s memory and cause it to crash. InfoWorld writer Randall Kennedy, who covers enterprise desktops, tested and verified the blue-screen crash on multiple computers and configurations. At this point, it looks like Windows 7 will ship to non-beta customers this week with the bug still there.

The real problem caused by this bug is that you may not be able to fix corrupted secondary drives until Microsoft issues a fix or figures out a workaround. For most people, this isn’t even a problem since they have no secondary drives.

I’ve asked Microsoft to respond with a fix, a workaround or a counter-story. For now, all I have is a nerdy blog post from Monday in which a more technical Microsoftee says that after testing the problem, they’ve concluded that “at this point the chances of any broad issue are extremely small.”

Meanwhile, here’s a video many people still haven’t seen of the Blue Screen of Death popping up during Bill Gates’ big demo of Windows 98 at the Comdex trade show. An anti-crash campaign waged by Microsoft engineers in the early 2000’s greatly reduced the number of blue screen crashes beginning with Windows XP.