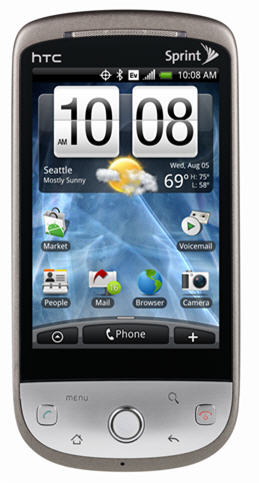 The new Palm Pre’s in Sprint stores are going to have some attention-grabbing competition in a few weeks. Sprint has announced its plan to sell the Hero phone, made by HTC and loaded with Google’s open-source Android operating system, starting October 11. A Hero will cost $279.99 in the store with a two-year service plan from Sprint. There’ll be a mail-in rebate for another $100, bringing the total cost for the phone down to $179.99.

Given the power of the Android platform, it’s interesting that Sprint’s marketing materials focus on talking up HTC’s Sense feature, which lets users configure the phone to respond to multi-finger touch gestures, and HTC Footprints, an application that creates the equivalent of postcards that combine location information — say, a restaurant — with text and audio notes. No video, sorry.

Basic speeds and feeds on Sprint’s version of the Hero:

Sprint’s full press release makes a lot out of the fact that the Hero’s search key can figure out if you’re looking at the Internet or your email. But it’s also got details on more features and apps.