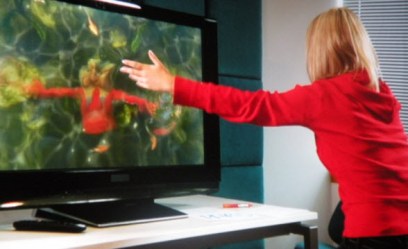 Microsoft took the wraps off its Project Natal — the controllerless, gesture-based game play system for the Xbox 360 — at the E3 show in June. But it never explained exactly how it was pulling off the image-recognition technology behind it.

With Natal, a 3-D camera captures your movements and translates them into game controls. You don’t need to hold a traditional game controller and can instead make something happen with the wave of your arm. Several 3-D camera makers have been working on making low-cost 3-D cameras. Microsoft bought 3DV Systems earlier this year, and it has also been working with PrimeSense. It wasn’t completely clear why.

At the Emerging Display Technologies conference this week, we got one answer. Frances MacDougall, chief technology officer at GestureTek, said his company was also working on Project Natal. Asked why there were so many vendors on Natal, he said that Microsoft will be using a low-cost 3-D camera from PrimeSense. But it purchased 3DV because it had a strong patent portfolio. And GestureTek itself is providing a software layer that helps interpret the data coming in from the 3-D camera and makes it useful for the game machine. Microsoft also tapped its research division for other technologies such as face recognition and voice recognition.

So there you have it. It takes no less than three vendors to deliver a major piece of Project Natal, which is rumored to be debuting next year.