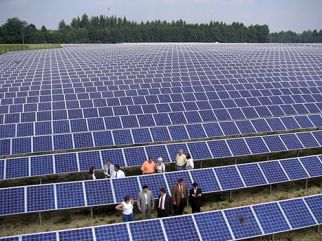 First Solar, the largest solar developer in the world, announced that it will be building the largest solar panel array in the world to date, at 2,000 megawatts, in the Mongolian desert. A massive undertaking, the facility isn’t expected to be finished until 2019. It will be part of the even larger 11,950-megawatt solar complex planned for the region (Ordos City, China) — enough to power 3 million homes.

The feat has been divided into four phases — with First Solar breaking ground on the first 30-megawatt facility next summer. By 2014, it plans to construct a 100-megawatt segment and a 870-megawatt segment, with the last 1,000 megawatts added over the subsequent five years. All of the arrays will use First Solar’s thin-film panels. As such, the project will probably include construction of an assembly plant just for the necessary equipment.

While China has been paying more attention to solar in recent months — especially with its renewable energy subsidies and the growth of its lead photovoltaic company, SunTech Power — this is the first major entrance into the country’s market by a U.S. solar company. It’s actually some of the first major solar development to take place in China as well, as SunTech and its other companies export most of their goods and services. For example, SunTech is contracted to build a series of photovoltaic plants in the U.S. in the next two years.

The announcement of the deal buttressed Tempe, Ariz.-based First Solar’s stock 11 percent ($12.94) to $134.41 on the Nasdaq. Wu Bangguo, chairman of China’s National People’s Congress traveled to Arizona to officially launch the partnership. The New York Times estimates that the 2-gigawatt plant would cost about $5 to $6 billion to build in the U.S., but should be substantially cheaper in China. The terms of the agreement include a feed-in-tariff, which fixes the price of the electricity generated by the array. Overall, China plans to spend a vast $293 billion on alternative energy development before 2020. Already, it’s in a position to use more renewable energy than the U.S., Europe and Japan by as soon as next year.