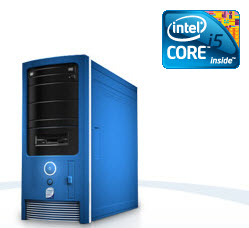 Bringing higher performance to mid-level computers, Intel launched a bunch of new microprocessors today based on its Nehalem chip family. Those chips will be the brains of some of the laptops, desktops and servers in the “fast-but-affordable” category.

These chips will likely be in computers built around Microsoft’s Windows 7 operating system, and as such they’re the foundation upon which computer makers hope to build their recovery this fall.

These chips were formerly code-named Lynnfield and are based on the Nehalem family introduced in March. They’re designed for high performance with digital media, productivity, gaming and other apps. They’re accompanied by a new Intel P55 express chip set, which lets a computer handle input-output functions with just one chip rather than two. The processors feature Intel’s Turbo Boost technology that lets a chip’s core run faster than its base operating frequency.