[Correction: This article originally and incorrectly described comScore as the only ad network in comScore’s top 10 Web video properties. ComScore does not include BrightRoll or other ad networks on its list. BrightRoll only claims that their reach is comparable to the top companies on that list.]

Tod Sacerdoti, who runs video advertising network BrightRoll, likes to tell people to look up comScore’s stats that show the number of videos watched by Internet users is higher than the number of searches they conduct on Google and elsewhere.

While I’m looking for those figures, you probably want to know that BrightRoll, which claims 34 percent of online video watchers are exposed to its ads, has launched behavioral targeting for video ads, so advertisers can now deliver ads specifically to, say, guys my age who are looking to buy a car. To quantify video user behavior into target markets, BrightRoll aggregates data fromBlueKai, eXelate, and NextAction among others. 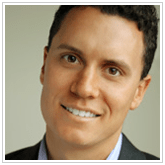 Sacerdoti, pictured at right, says the company’s internal whiteboarding forecasts that in 18 months, 20 percent of video ads will be behaviorally targeted, or “BT” in ad biz jargon.

Why hasn’t it happened already? “There are two main things that need to be solved to do BT well,” Sacerdoti told me over the phone. “The first is you have to have enough reach and enough ad impressions that you can find a segment often, such as “men between18 and 35 who are looking to buy a car”. If you can’t find the segments, you can’t fulfill the budget.

“The second is that in text, targeting is easy, but in video there are a lot of unsolved questions.” One is who decides what ad to serve. “The answer is, ‘It depends,'” Sacerdoti said. “Certain publishers don’t allow third-party serving, others do. In video, how ad networks access large pools of inventory is not standardized yet.  So we all have our propietary pools, but you can’t access the inventory you don’t control, to see what other inventory is available.”

So while BrightRoll can now target some of the people some of the time, there’s a lot more work to be done before video ad networks are as tightly interwoven as those for text and banners. With the advertising market coming back around, and Google now brazenly claiming to be planning video ads for search results, advertisers’ dreams of Web video ads suddenly seem to be on the fast track.