BrightSource Energy, developer of large-scale solar thermal plants, has contracted engineering giant Bechtel to build its Ivanpah Solar Energy Generating System in California — a complex of three solar plants expected to produce 440 megawatts (enough to power about 330,000 homes). Bechtel will also be investing equity in the project — giving BrightSource some of the support it needs to fulfill other contracts amounting to 2.6 gigawatts worth of energy. 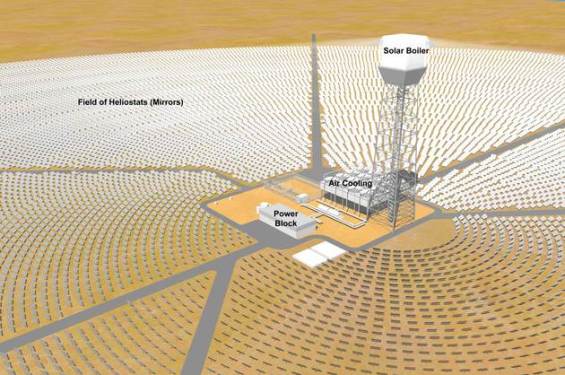 Oakland, Calif.-based BrightSource has already landed deals with Pacific Gas and Electric and Southern California Edison to sell the power generated by the Ivanpah development. No financial terms have been released, but this should grease the wheels for fast construction.

As a solar-thermal installation — not a photovoltaic array — the project will use flat mirrors to concentrate sunlight on the top of “power towers,” where water will be converted to steam to turn turbines (see diagram above). While this design is generally cheaper than huge farms of solar panels, industry insiders guessed that BrightSource would run out of money before fulfilling all of its plant-building contracts. 2.6 gigawatts is a massive undertaking — surpassing even the 2-gigawatt plant First Solar announced it will build in China. Bechtel’s involvement will help somewhat — and it’s name could certainly attract other bigwig investors — but it’s not going to cover the costs of the whole Ivanpah project either.

Instead, BrightSource is betting on receiving a loan guarantee from the U.S. Department of Energy as part of the stimulus package. The company hasn’t discussed how much it is seeking from the government, or whether it would use a potential loan to cover the rest of the Ivanpah costs.

The three plants will be located in the Mojave Desert near the California-Nevada border. The land in question will still be owned by the government and controlled by the Bureau of Land Management. Two smaller plants, producing 100 megawatts each, will take up 850 square miles. The third, larger plant will produce 200 megawatts and require 1,600 acres. Bechtel will also oversee the construction of roads and powerlines needed to operate the plants and transmit the electricity generated.

There are few companies besides Bechtel with the technical prowess and interest in solar that could have partnered with BrightSource in this feat. Lockheed Martin is the other logical choice, as its already working on a 290-megawatt solar thermal plant for the Starwood Energy Group in Phoenix. But Bechtel also has extensive solar experience, dating back to several Southern California projects in the 1980s (developed by one of BrightSource’s founders, to boot). It’s somewhat ironic that Bechtel is responsible for building many of the coal-fired, natural gas and nuclear energy plants that renewable and solar proponents are trying to replace. But given the current political climate, it’s no surprise that the company is moving to green up its public image.