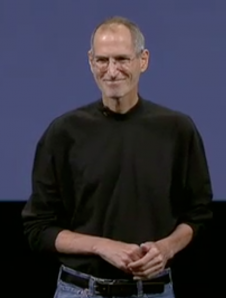 After Apple’s fun-but-not-earthshattering debut of a video-shooting iPod Nano earlier this week, Steve Jobs gave New York Times reporter David Pogue an interview. Asked if Apple was ready to debut an e-reader like Amazon’s Kindle — but much, much prettier, of course — Jobs said he didn’t think e-readers made sense:

“I’m sure there will always be dedicated devices, and they may have a few advantages in doing just one thing,” he said. “But I think the general-purpose devices will win the day. Because I think people just probably aren’t willing to pay for a dedicated device.”

He said that Apple doesn’t see e-books as a big market at this point, and pointed out that Amazon.com, for example, doesn’t ever say how many Kindles it sells. “Usually, if they sell a lot of something, you want to tell everybody.”

The Internet’s vote is in: Why believe him? Guardian correspondent Bobbie Johnson unearthed past quotes in which Jobs bluffed on video iPods:

“One of the things we say around Apple, and I paraphrase Bill Clinton from the 1992 presidential race, is ‘It’s about the music, stupid.’ … You can’t watch a video and drive a car. We’re focused on music.”

And in which Jobs’ vice president of iTunes, Eddie Cue, misled readers prior to the iPhone’s debut:

“What we’ve talked about is a something that is valuable for the mass market,” Cue said. “It has to be a phone in the middle-tier of the market, not a $500-tier phone. It has to be very seamless to use.”

Our guess: Apple will sell a device that reads books and then some. Jobs will explain how it all makes sense. I’ll write a post agreeing with him. Steve’s liver may be flaky, but his Reality Distortion Field works just fine.