With more companies looking to move their applications onto cloud infrastructure, startups are emerging that offer services to facilitate that process. Cloudkick, for example, says it has built the easiest way manage your applications in the cloud, and it has just raised raised $750,000 in funding.

The San Jose, Calif. company was part of the winter class at startup incubator Y Combinator. When it launched in March, I thought it was one of the most promising of the bunch. Cloudkick customers use online services like Amazon’s Elastic Compute Cloud as the infrastructure for their applications, then use Cloudkick to keep things running smoothly. The company’s model is similar to another company’s, RightScale, but co-founder Alex Polvi touts Cloudkick’s’ ease-of-use and its compatibility with multiple cloud platforms. Features include a dashboard providing an easily digestible overview of your infrastructure status, email alerts when things go wrong, and graphs that help you visualize data such as bandwidth requirements.

In the six months since its launch, Cloudkick has been working to live up to its promise of supporting multiple cloud platforms — right now it works on Amazon, Rackspace, and Slicehost. It’s also developing services that customers will pay for (everything’s free for now). It’s also leading an open source project, called libcloud, dedicated to allowing developers to create applications that work on multiple platforms (the lack of standardization and portability between platforms is often cited as a concern with cloud computing).

The funding was led by Avalon Ventures, with participation from Nueva Ventures. It’s not a huge amount of money, but Polvi says it should give the team about 18 months to build the company. The founders recently made their first hire — Paul Querna, formerly vice president of infrastructure at the Apache Software Foundation.

Update: Avalon’s Rich Levandov just sent me an email with some thoughts on why he invested:

My thinking is that with the explosion in cloud service providers and cloud services users over the next few years, server management system tools will be a very important new part of the cloud services software stack. Users will want the flexibility to easily and seemlessly move their apps around while benefiting from management tools and alerts. Providers will all need to provide services like Cloudkick’s for a complete offering.  Cloudkick has all this today and more cool features on the way. Smart, fast team with a great product sense. 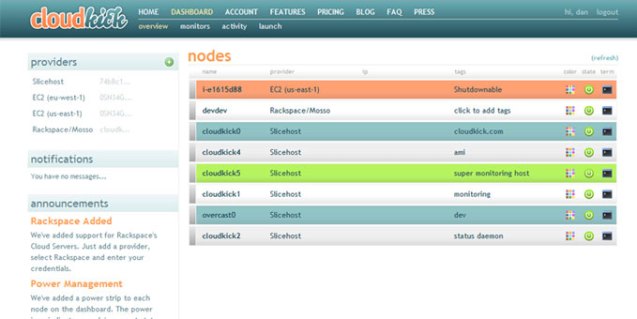