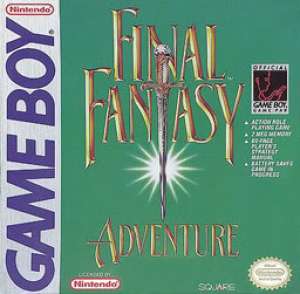 Anyone who is familiar with console Action-RPGs has likely heard of a title called Secret of Mana. This SNES Action-RPG classic captivated gamers with its gorgeous visuals, three-player simultaneous real-time gameplay, and its nearly unparalleled musical score. Sixteen years later, it remains as a cherished memory etched in the minds of the fortunate souls who played it.

Sadly, most of these players are unaware that Secret of Mana is actually the second game in a series titled Seiken Densetsu, which translates to “Legend of the Holy Sword.” The first game in this series actually made it to North America, but was released under a Final Fantasy name like many other early Square titles.

The first Seiken Densetsu game, titled, Final Fantasy Adventure was released in a surprising format. It wasn’t on the NES, the Master System, or Turbografx; rather, it was released on Nintendo’s relatively new portable called the Game Boy. This 1990 title basically slid in the back door. Gamers were too enamored with titles like Super Mario Land to take notice of this upstart even though it had the name “Final Fantasy” in its title. Unfortunately, Final Fantasy Adventure went under the radar, so many gamers didn’t get to experience it until it was re-released in 1997.

I was one of these lucky players who experienced it upon its re-release. In 1997, I’d just gotten a Game Boy, and had recently become an RPG enthusiast, so I was looking for a portable title that would keep me busy during long rides and camping trips. I soon discovered a game called Final Fantasy Adventure in an issue of Nintendo Power. When I first noticed it, I was thinking “Yes! A portable Final Fantasy!”  I had no idea it was connected to Secret of Mana until I started playing it.

Nearly thirteen years later, I decided to re-experience Final Fantasy Adventure along with the other games of the Mana franchise. I wanted to see how well Final Fantasy Adventure’s gameplay held up over a decade later, and decide if it was a worthy investment for fans of the original Game Boy. After completing this grand adventure for a second time, I walked away surprised.

Final Fantasy Adventure’s nearly twenty-year old gameplay still holds up phenomenally well. You begin the game as a male character with the four-letter name of your choice. The hero can only walk in four directions as in the first six Final Fantasy games, but he performs attacks in real-time, as you would in a Zelda title.

Your hero can equip a variety of weapons ranging from swords to morning stars. Swords are primarily useful for attacking enemies, but many of the game’s other weapons are useful for passing environmental obstacles. If thick plants are blocking your path, simply wield a sickle to hack away at that unwanted vegetation. Likewise, if some enormous trees are in your way, equip a battle axe and become a virtual Paul Bunyan. There are plenty of other handy weapons such as the chain, which acts as a hookshot.

If this sounds like a Zelda imitation to you, think again. There are a variety of each of these types of weapons (as well as additional weapon types), and all give different stats when equipped. You can also equip various pieces of armor such as helmets, body armor, and shields to increase your defense. As you can see, this is similar to Zelda, but also includes RPG elements.

Besides aiding you in getting past obstacles, your weapons are useful for slaying a variety of foes.  Certain weapons will do more damage than others, and other weapons won’t even penetrate your enemies’ armor. It’s important to have the ideal tools equipped for each particular situation. 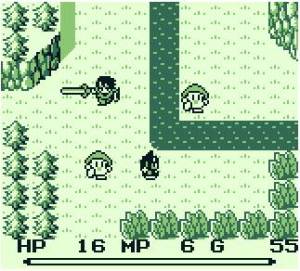 Fortunately, if you have a weak weapon equipped, you can enter the menu at any time to equip another weapon. You’ll have to do this frequently, as sometimes you’ll need tools that can smash walls, and at other times, you’ll need weapons that will enable you to cross gaping chasms.

Final Fantasy Adventure’s hero has an excellent set of weapons, but no Action-RPG is complete without a magic system. Thankfully, FF Adventure delivers an assortment of spells that are handy for solving puzzles, healing, and defeating massive bosses.

You’ll start out by learning basic spells such as Cure, but later on, you’ll learn moves like Ice that are handy for a variety of situations. Ice not only enables you to damage enemies with thick armor–it turns your foes into snowmen. Not only is it fun to use, but it’s quite handy. You can guide your ice spell remotely as you would a Nikita missile in Metal Gear, so you can freeze a foe standing on a switch that is inaccessible by foot. Spells like this keep you from growing tired of hacking up enemies.

Thankfully, Final Fantasy Adventure’s battles don’t get old, but even if they did, it’d be hard to grow tired of the game with its assortment of beastly and cutesy foes. You’ll battle massive dragons, dark knights, ninjas, and an assortment of creatures found in later Mana games such as rabites. These aren’t the most intelligent of foes, but at least fighting them never becomes a hassle due to Final Fantasy Adventure’s excellent leveling system.

While traveling the game’s overworld and numerous dungeons, you’ll battle through hordes of enemies that will grant you experience and GP. Once you’ve obtained enough experience, you’ll gain levels as you would in other RPGs. However, there’s some unique features to this system that should be noted.

When levels are gained, the player can choose between four stats to upgrade. You can choose between strength, stamina, wisdom, and will. Strength raises your attack power; stamina increases your HP; wisdom raises your MP; and will makes your charge attack gauge build faster. Basically, you can decide how and at what pace to develop your character.

It’s fun tinkering with your stats, and you’ll never get bogged down with extraneous details. Fortunately, gaining levels is quick and painless, so you’ll find yourself tweaking your character’s stats regularly. Building up your warrior in the way you desire is a rarity in JRPGs, so I found this approach quite refreshing.

When mentioning Final Fantasy Adventure’s level system, I brought up a charge attack gauge. This screen-wide gauge is found at the bottom of your screen, and it’ll build up over time simply by walking around. Once it’s full, you can execute a special attack with whatever weapon is equipped. This charge-attack system isn’t as useful as that found in Secret of Mana, but it’s fun executing a powerful attack now and then.

One other important combat detail that needs to be addressed is Final Fantasy Adventure’s helper system. As with most other Mana titles, you can have a helper in your party. Unfortunately, these helpers are only AI controlled, but nevertheless, their abilities can be quite handy. They may wander into walls aimlessly, but you can access their abilities at any time simply by pressing start and choosing “ask.”

Some AI controlled characters will heal your wounds, while others will shoot laser beams out of their eyes. Even better, you’ll later get your own Chocobo that allows you to cross land and sea. Moogles make an appearance too, but only when you’re turned into one by an enemy.

By now, it should be evident that Final Fantasy Adventure was ahead of its time–at least from a gameplay standpoint. It introduced many new ideas, which were incorporated into later Action-RPG, including Zelda. What’s even more remarkable is that it’s still fun.

I had a blast fighting enemies, traveling through towns, and solving numerous puzzles. While fighting, the enemies may have got in some cheap attacks on occasion, but Final Fantasy Adventure’s save anywhere system prevented frustration from the rare cheap death that would occur.

It was also fun strolling through towns. The dialogue may have featured poor grammar, and sometimes you couldn’t move past NPCs without talking to them, but I appreciated the generally clear directions that were given by townsfolk. At times, I’d have to scour the world for a new area, but usually, plenty of guidance was given.

Even better than the short towns was the puzzle solving. The puzzles weren’t overly complex–they usually involved finding a way to open a locked door, but each area included some creative elements.  For example, one dungeon included a mine cart sequence with switches, which would be included in many later Action-RPGs.

Despite having enjoyable dungeons, FF Adventure isn’t without its flaws. To progress to new areas, you have to carry a large stock of keys and mattocks (disposable tools that can break through walls).  Unfortunately, it’s possible to get stuck permanently if you don’t have enough keys, so it’s important to always carry at least eight keys. I never got stuck during either of my play-throughs, but it’s been known to happen, so it’s best to be prepared–especially since you have a decent-sized inventory. 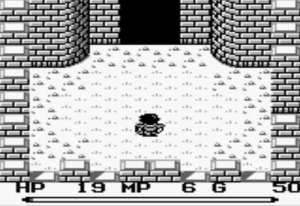 You also have to explore rooms thoroughly as you would in the first Zelda. Walls you have to destroy are usually marked in some way, but sometimes you’ll find yourself wandering around in circles searching for your destination when there’s a secret door you should have unlocked awhile ago. This could be an issue for players who didn’t play the original Zelda, but most people familiar with games of the NES era shouldn’t have any problems.

Game Boy audio is notorious for being of poor quality, but the composer of Final Fantasy Adventure somehow managed to produce a selection of memorable tunes. The theme song for example, has become a beloved piece that is included in many current-generation Mana titles. It’s a beautiful piece that helps you feel the serene, yet tragic world of Mana.

You’ll also find plenty of other sad and upbeat pieces that help Final Fantasy Adventure’s world come to life. Most of the music isn’t as impressive as what you’d find in later Mana titles, but it’s easily one of the best Game Boy soundtracks in existence.

The last noteworthy element of Final Fantasy Adventure is its storyline. You begin the game as a slave of Dark Lord, risking your life as a gladiator for his entertainment, but you soon escape with the help of your friend. Later, you run into a girl that carries  a Mana Pendant that enables the wearer to reach the Mana Tree protecting the land.

Dark Lord and his second-in-command named Julius are seeking this relic in order to obtain the ultimate power. Okay, so the story won’t win any awards for originality, but it was decent for a Game Boy title. And it provided for some cool environments such as airships, a Mana Temple, and a tower beneath the sands of a crystal desert.

I could go on and on about this impressive Game Boy title. Its innovative gameplay elements, soundtrack, and world all hold up remarkably well. The graphics may look a bit dated, but they’re still better than the visuals you’ll find in ninety percent of the available Game Boy titles. You also won’t find the graphical glitches present in many early Game Boy games that aren’t half as ambitious. Currently, there are better Action-RPGs available for consoles that include multiplayer, but if you own a Game Boy, Final Fantasy Adventure is worth playing to see the wonderful beginning of the Mana franchise.