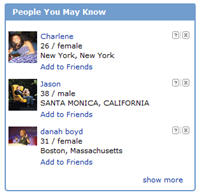 Facebook’s motive was no secret: Tornado was designed to make it easy for other web sites to connect to Facebook, to scrape customer info and to reuse it on the FriendFeed site — whose parent company and staff Facebook acquired last month. Making it easy for more sites to maintain a huge number of continuously updated high-speed connections to Facebook  is, to internet marketers, a smart way to extend Facebook’s reach even further.

Today, Facebook was followed by a similar announcement from MySpace, the Beverly Hills-based company whose thunder was long since stolen by Facebook and Twitter. Qizmt, as MySpace’s technology is called, currently powers the People You May Know box (pictured) presented to logged-in MySpace users. But Qizmt “can be used for many operations that require processing large amounts of data, such as collaborative filtering for recommendations and analytics,” MySpace chief operating officer Mike Jones wrote in a blog post.

There’s one problem with reporting on Tornado and Qizmt: I’m still not clear on what they do. MySpace spokeswoman Amy Walgenbach tried to clear it up for me:

Qizmt is not a web server, it’s not about the presentation of data, it’s about the processing of data. It’s not even in the same realm of technology as Tornado Web Server, so a comparison between the two seems strange and off topic. They are different software to address different purposes. You could say this technology is more like Hadoop, but definitely not like anything Facebook has built.

Hadoop runs on up to several-thousand server clusters, with a goal of scaling to 10,000. Google reportedly has many sub-clusters, each perhaps of this magnitude, but some estimate their total cluster size to be greater than 500,000 servers. And they’re looking ahead to when they’ll have on the order of 10 million machines!

The end result for MySpace will ideally be lots more web sites like FriendFeed that connect to MySpace’s servers to maintain real-time updates on their own member pages. MySpace previously released open-source software for web page performance testing, so the company has already been through the sometimes painful process of donating software to web developers. (I say that because I used to be a developer. We thrived on being difficult.)