Facebook bolstered its position as the world’s leading social network, surpassing the 300 million user mark and becoming cash-flow positive ahead of schedule.

In non-accountant terms: Facebook is making money. “Free cash-flow positive” means that the company is profitable after setting aside capital for maintaining or growing its asset base. The company isn’t changing its forecasts for 70 percent year-over-year growth in revenue.

The numbers will show up tech industry watchers who have been looking for signs that Facebook has lost its momentum and, less measurably, its coolness on the Internet. As for that, the company made its announcements at today’s TechCrunch50 conference, an event in San Francisco mostly focused on emerging startups. The company has been EBITDA profitable (or profitable after interest, taxes, depreciation and amortization) since last year and was slated to become cash-flow positive in 2010.

The company wouldn’t break out exactly why it reached cash-flow positive territory early, except to say overall user growth is a big factor.

At five years of age, Facebook is seeing its growth is speeding up, not slowing down. The site has added 50 million users in two months. Previously, it had taken 3.5 months to grow from 200 to 250 million users.
The company also launched a Google Labs-like space called “Prototypes” where they can test out features that will slowly be introduced to the site at large. Some of the projects in testing include desktop notifications, which would add functionality similar to the popular Tweetdeck software and other Twitter clients that alert users whenever there are fresh tweets to read.

Facebook also showed an enhanced event concept that can sync with Outlook calendars. It’s a neat trick, although it risks connecting many Facebook users to the people they had joined Facebook to avoid. 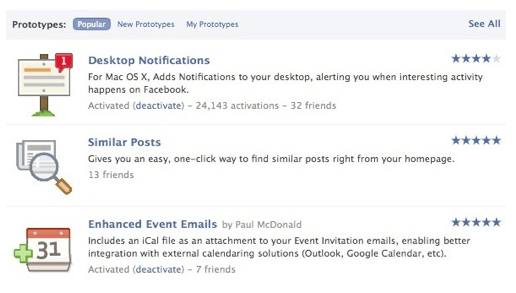