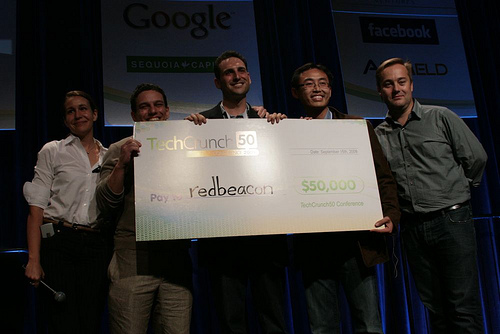 RedBeacon, a startup that helps people find local services like maids or repairmen, won best of show at the TechCrunch50 conference in San Francisco today.

The startup is in many ways what Craigslist could have become for local services. Formed by a group of ex-Google employees, the company is focusing on five markets at first including gardeners, personal trainers, and maids. (The idea is to focus on businesses that don’t have a one-price-fits-all model and that customers need somewhat regularly.) It will launch in the San Francisco Bay Area first. 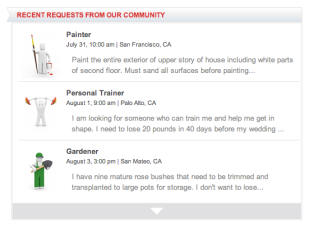 Another point that makes RedBeacon somewhat different is that instead of focusing on sellers, it caters to buyers, who specify exactly what they need and when. If you need someone to do a job, you go to the site and create a profile of the job. Then relevant service providers are alerted and can bid for when they’ll do the job and for how much.

Second place went to Threadsy, which compiles all your e-mail and social networking feeds, into one place. Unlike FriendFeed, which is a similar concept in theory, it includes e-mail, and there are different ways to filter the content.

Third place went to CitySourced, a mobile app that lets residents report problems like graffiti or potholes to their local government. Fourth runner up was AnyClip, which can search movies for best quotes and memorable moments based on user-generated tags. (It was also the audience favorite, and the favorite of VentureBeat writer Anthony Ha and me.)

iMo, which initially had its demo break down on-stage, won best presentation after it recovered and showed its gaming technology for iPhones. Israeli startup Trollim, which is a site where coders can compete, won best international startup.

You can find links to all of our TechCrunch50 coverage here.