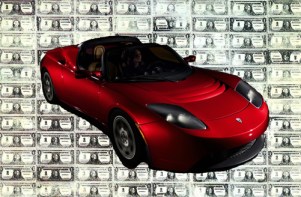 Tesla Motors, the anointed leader in the electric vehicle market, has raised $82.5 million in a sixth round of funding from Daimler, Fjord Capital Partners, Aabar and other undisclosed investors. The amount has been tacked on to the $50 million the San Carlos, Calif. company brought in from Daimler, when the Mercedez-Benz producer took a 10 percent stake in May. All told, Tesla — valued at an estimated $550 million by Daimler — has raised a staggering $783.5 million to date.

The new money will be funneled into production of the new Model S — a mid-size sedan that the company says will be more affordable for middle-class consumers than its $109,000 roadster. It’s slated for release in 2011. Tesla already plans to sink $365 million of the $465 million loan it nabbed from the Department of Energy into a California manufacturing facility for the Model S. It has yet to name a site for the plant, a decision that is being closely watched by the industry and investors alike. The company says the funding provides more than enough runway for the car’s development, including unforeseen setbacks.

In fact, some of it will also be used to expand the company’s retail operations. It opened several showrooms already this year, with plans to roll out others in Monaco, Washington D.C., Miami, and Toronto. These regional toeholds will double as sales and service outlets where technicians will be available for repairs and upgrades.

CEO Elon Musk, who didn’t invest in the round as he has in the past, says Tesla didn’t even actively fundraise. Rather, several investors interested in collecting shares initiated talks. Fjord, a European private equity manager specializing in clean energy, is a new backer.

The new round of funding continues a winning streak Tesla has enjoyed since the Daimler investment four months ago. Since then, it has achieved profitability (at least for the month of July, though many industry insiders are skeptical even of that), won generous government loans, opened swanky showrooms in Seattle, New York and Munich, and landed new headquarters in the Stanford Research Park.