EA will use Vivox voice services as an integrated part of its upcoming Command & Conquer 4: Tiberian Twililght real-time strategy military PC game. The game features a multiplayer mode where five players can take on five opponents, making fast communication a critical part of the game. Other EA games using Vivox will follow later.

These developments show the momentum of Vivox and the growth of voice chat on the web. It seems that EA has discovered one of the key benefits of integrating voice chat directly into an online game: when gamers chat with each other, they stay online longer for each session and they play a game for a longer period than they otherwise might.

“People use voice chat to get a tactical advantage in some games,” said Monty Sharma, vice president of product management and marketing at Vivox in Natick, Mass. “But the main reason they use voice chat is social. We’ve growing fast because the game industry is changing and becoming more social.” 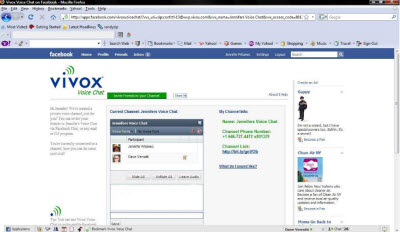 While other voice chat clients are cumbersome to use and require users to engage in multiple steps before they start talking, Vivox is pretty easy to use. Players simply share a link with each other, click on the link, and then they can start talking. That’s why Vivox has more than 15 million registered users who have are chatting for 2.5 billion minutes a month. The company was started in 2005 by Sharma, Rob Seaver and James Toga. The user base has grown 800 percent in the past year.

The Vivox Voice Chat for Facebook application, dreamed up by members of the company’s Vivox Labs outfit, goes beyond games. It lets people who are friends on Facebook engage in voice chat any time. The Facebook app is simple to use; you share a link and start talking.

In a company survey, Vivox followed 100,000 users and found that those used voice chat in their games were four times more likely to be playing a game five weeks later than those who didn’t. Players who talk via voice trust each other more and interact longer. Vivox has had as many as 6,000 people in a single voice chat session.

Vivox was founded in 2005 by Seaver, Monty Sharma and James Toga. They set out to make voice an integral part of a game where the quality was as good as a landline telephone call. It has 35 employees and has raised $14 million in two venture rounds. Investors include Benchmark Capital, Canaan Partners and GrandBanks Capital.

Rivals include Voxli, Dolby Laboratories, TeamSpeak and Ventrilo. But Vivox has a big advantage in a variety of online games. Its voice chat has been integrated into Station Voice, a voice chat service that Sony Online Entertainment is using in its existing games, including EverQuest, EverQuest II and Star Wars Galaxies. Sony will also use Vivox in future massively multiplayer online games such as DC Universe” and The Agency. Vivox Labs has also creates apps such as Puggable.com, which lets World of Warcraft players use voice chat to command big groups of players who attack monsters and other enemies simultaneously in the online game. And Vivox is working with 38 Studios, the fantasy online game publisher founded by baseball player Curt Schilling.

Vivox makes money in a variety of ways, including services such as voice ads, voice mail, text messaging, and voice fonts (where players can change the sound of their voices). It also makes money through virtual goods, for example when players sell virtual items such as cell phones in online worlds like Second Life.