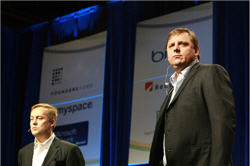 “I can tell you that this is the last TechCrunch50,” event co-founder Jason Calacanis told humorist Loren Feldman last night in a video interview after the close of the third annual TechCrunch50 conference in San Francisco. The event brought nearly fifty unknown startups, peppered with a few ringers like Facebook, onstage to debut in front of an audience of potential investors, partners and competitors.

In the spirit of the event’s Internet-startup focus, news of TechCrunch50’s end was first reported online by a puppet.

Calacanis openly talked about a fight with event co-founder and TechCrunch editor Michael Arrington to some conference attendees last night. He later tweeted to ReadWriteWeb reporter Jolie O’Dell that “this was the last TechCrunch50.”

Arrington responded to a request for comment this morning with a text message: “Did you really just ask me to comment on a puppet video?”

[Update: VentureBeat’s Matt Marshall just reached Arrington on the phone. Arrington declined to comment on the future of the conference, other than to say he hasn’t talked with Calacanis about his remarks: “I don’t know how to respond to that. After seeing that video, it seems to me that he’s engaging in theatrics and fireworks. I’m waiting to see what his plan is. It seems to be distracting from the startups.” Rumors have circulated that Arrington and Calacanis had split over the profit-sharing terms of their partnership, but Arrington said he had no comment on that. If the two have split, it’s entirely possible of course that Arrington could relaunch the conference under a different name — something else that Arrington declined to comment on.]

Arrington failed to appear at Tuesday night’s climactic presentation of a TechCrunch50 award to startup company RedBeacon. Calacanis, attendees said, encouraged the audience to call Arrington to the stage without success. Calacanis represented TechCrunch50 by himself in promotional photos shot with a giant check. 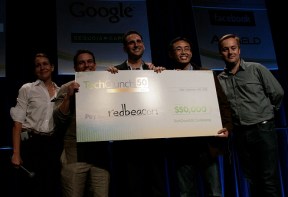 In the video below, Feldman interviewed Calacanis on Tuesday night using a puppet he created to parody social media consultant Shel Israel. (I don’t know either man well, but the puppet Shel makes me laugh.) At 1:30 into the video below, the interview turns serious:

Puppet Shel Israel: Is the rumor true that you and Arrington almost killed each other?

Jason Calacanis: Well, I can tell you that this is the last TechCrunch50.

Shel: What? Are you really? Really?

Calacanis: Yup. It’s over. We had three good ones but this is it.

Shel: (To camera) An exclusive! Shel Israel, there will be no more TC50’s. (To Calacanis) You’re full of shit! I don’t believe you.

Calacanis: No, it’s true, this is the end.

[Disclosure: VentureBeat co-produces DEMO, a conference that is competitive to TechCrunch50]