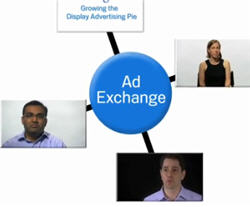 Google, the Internet’s advertising monolith, has a plan it hopes will draw ad buyers to spend more on “display ads,” the pictures, videos, and interactive Flash games that pull your eyes away from dull old text and deliver your eyeballs to a marketer with a message.

Display ads, while much more attention-grabbing, have failed to sell as well as Google’s unique text ads.

Google has produced a video, below, that explains how Ad Exchange works. In short, it’s an online marketplace where advertisers can buy spots for their display ads from large Internet publishers, many of whom have lots of open space that Google says is too hard to find and buy. Billions of dollars’ worth of potential ad placements, the company says, go to waste because they’re simply too hard to find. Ad Exchange will serve as a single point of purchase for display ad campaigns.