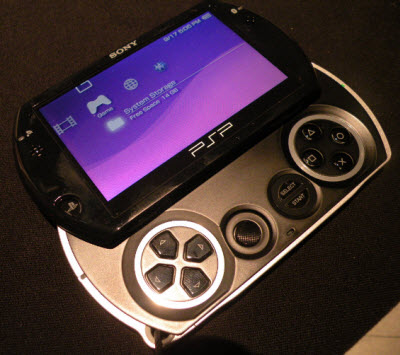 Sony is chasing the Apple iPhone and its AppStore with the new PSPgo handheld game player. But by coming out with a device built for games you’ll want to play for 10 hours or more it should keep the allegiance of hardcore gamers. Sony showed off the PSPgo and many of the games that go with it last night at the Harlot bar in San Francisco, and they look marvelous. (Check out the video shot by Alexa Lee of Ooyala.)

The device, which goes on sale Oct. 1 for $249, brings Sony fully into the age of digital downloads, as that will be the primary way you get games on the device.

It feels light in your hand but the screen graphics can match the quality of a PlayStation 2 game. The games are also more responsive than iPhone games. You can use the controls to precisely manipulate what happens on the screen, while iPhone games have coarse touchscreen or accelerometer controls. Of course, there is a different market that Sony is addressing here. The PSPgo is for gamers who feel comfortable mashing buttons and steering sticks. The iPhone is more for those who welcome training wheels on their bicycles. (That’s not such a bad thing, as it broadens the market for games.) 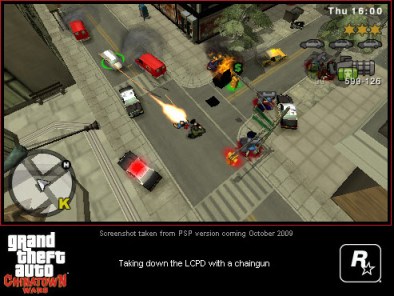 The prettiest game I saw on the PSPgo was Rockstar’s Grand Theft Auto: Chinatown Wars, which launched on the Nintendo DS in a more primitive state. The game has a top-down view of a big virtual world where you can steal cars, fight the cops, battle with gangsters and deal drugs. Yes, just the sort of thing you want your kids to have; you just have to remember a lot of adults will be playing with the PSPgo. There’s a great level where you can drive through the streets of Liberty City with a tank that can blow up anything its path. 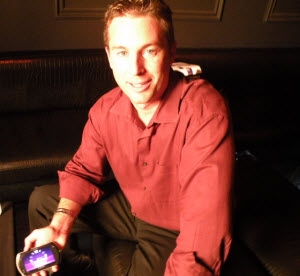 Using the analog stick, you can drive a car pretty easily and fast with the PSPgo. You can see that in upcoming PSP games such as Gran Turismo, which had stunning graphics as well. But there were times when I was playing games such as Loco Roco Midnight Carnival that I wished the PSPgo had the iPhone’s built-in accelerometers to let me control a game by tilting the device.

If you play a game for the iPhone and play the same one for the PSPgo, you’ll notice a huge difference. The Assassin’s Creed II game for the iPhone is a side-scrolling, pseudo 3-D game. But Assassin’s Creed Bloodlines for the PSPgo is a full 3-D game with expansive environments where you can wander freely as you hunt down assassination targets. PSPgo games are big enough for the developers to include whole cities as game environments. The Bloodlines game, for instance, has two cities with eight districts to explore. Beaterator, a new hip-hop music game from Rockstar Games, is also making a debut on both the iPhone and the PSPgo. That game, inspired by the sounds of singer and music producer Timbaland, takes the PSPgo into the world of media sharing. You can mix 3,000 different songs together and create your own DJ jam sessions on the PSPgo and then share it widely with your friends.

Will the PSPgo succeed? The large question is whether the PSPgo is arriving in time to help Sony in the video game wars. The Nintendo DS and DSi have sold more than 100 million units, so Sony is a distant second place. The PSPgo, the third version of the PlayStation Portable launched in 2005, is plenty late. John Koller (pictured), director of hardware marketing at Sony’s U.S. games division, says the company labored on the design for two years. During that same time, Apple has sold more than 50 million iPod Touch and iPhone devices and fans have downloaded more than 1.8 billion apps from the AppStore. Any day now, Apple should surpass the number of PSPs Sony has sold in five years.

Sony is finally arriving in the age of digital downloads with the PSPgo, which plays games or movies that are downloaded via Sony’s PlayStation Store. This device has no disk-based games as the older PSPs have. And while Sony is selling a lot of full-priced PSP games, it will also sell “mini” games for $1-9. Sony’s hardware sells for $249, while Apple’s iPhone 3GS and its iPod Touch 16GB sell for $199 each. You do get some extras for the higher price you pay for the Sony device. It’s a real gaming device with a sharp and colorful screen, though it’s not a touchscreen. You can use the shoulder button controls to play a video or music. But when you play a game, you can slide out the keypad with the traditional controls of the PlayStation Portable, including an analog stick which allows you to move in a precise way. 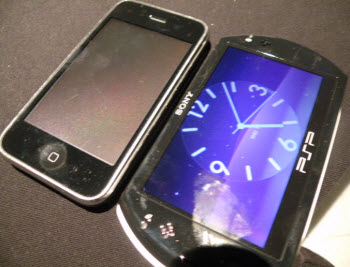 The PSPgo is 50 percent smaller and 40 percent lighter than the original PSP-1000 system. Its 3.8-inch screen is very bright with a resolution of 480 x 272 pixels. It can display 16.7 million colors. By comparison, the iPhone has a 3.5-inch touchscreen, as you can see in the photo on the right. Sony chose not to put a touchscreen in the model because the button and analog controls are far more precise than current touchscreen technology. With 16-gigabytes of flash memory, you can stored something like a few dozen games, depending on the storage amount of the content. The device comes in pearl white or piano black, and it has a slot for Memory Stick Micro cards for flash memory expansion.

You can get games in a couple of ways. You can download games and movies on PlayStation 3 via the PlayStation Network. You can also use Sony’s MediaGo software (available at PlayStation.com) on a PC. The free MediaGo software lets you download content and transcode it (reformat video etc.) so that it runs on the PSPgo. It remains to be see if all of these features are going to be enough to help Sony change its market share dramatically.

For those who want the complete list of what is coming soon, here you go: