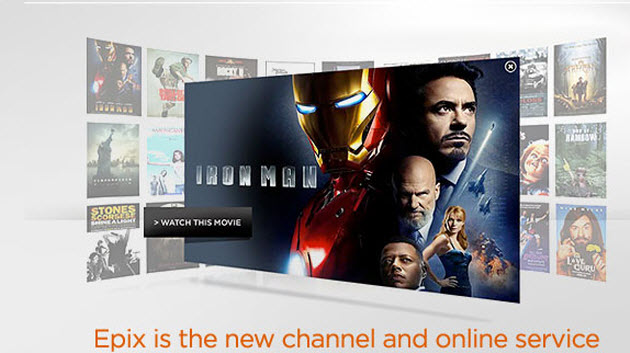 EPIX, a brand new movie channel currently in private beta, is about to begin rollout with Verizon’s broadband TV network in a big challenge to established paid movie channels such as HBO.

On top of that, the company is announcing today that its three member studios — MGM, Lionsgate, and Viacom’s Paramount Pictures — plan to offer EPIX MegaPlex, a video-on-demand service that will let consumers choose from more than 3,000 movies — including recently released titles such as Iron Man — which they can watch instantly via online video streaming technology.

The different pieces of the EPIX service are rolling out in stages. In October, the EPIX TV channel will go live on Verizon’s FiOS TV pay TV service, which is available to those who subscribe to Verizon’s FiOS broadband network, which brings broadband connections into homes via fiber optic cables that come direct into the home. Verizon has 2.5 million pay-TV subscribers now.

The Verizon subscribers will be able to watch the EPIX TV channel while they’re on the road by logging into EpixHD.com. EPIX MegaPlex, meanwhile, is a much deeper on-demand movie service that lets you choose from 3,000 movies. It will be available online by early next year.

The combination of a TV channel — where you are watching a single show at any given time — and the on demand service presents a new breed of competition to pay-TV channels such as HBO, Starz and Showtime. It also means that the movie studios may finally have a strategy that will work in an age where more media is consumed online than off.

New York-based EPIX is offering its channel (No. 895) on Verizon’s FiOS broadband network, which includes both online Internet service and a FiOS TV service delivered into homes. The online site, EpixHD.com, will give FiOS TV subscribers the convenience of watching movies anytime, anywhere — not just in their homes.

Why would anyone pay for yet another movie subscription service? Emil Rensing, chief digital officer at EPIX, said in an interview that viewers will have access to movies that have left the theaters but are not yet on other cable networks. Right now, it takes about a year for HBO to show a film after its theatrical release.

Verizon’s FiOS TV is not available in a big slice of the country yet, but Rensing said there are more distribution deals to come. Some media watchers have expressed skepticism that EPIX can snag a lot of distribution deals. EPIX was born in part because the three major studios couldn’t come to an agreement with Showtime over compensation for providing the pay-TV channel with movies. When the negotiations collapsed last year, the studios formed EPIX.

While the ad-supported Hulu.com offers lots of free TV shows and a catalog of older movies now, EPIX promises to deliver lots of recently released movies, including exclusives that other channels won’t get. Rensing pointed to Paramount’s Iron Man as a film that will be available on EPIX, both on FiOS TV and online, before other channels can get it.

While Netflix and Hulu have thousands of videos available, Rensing says that the library of classic and current movies from EPIX will be the largest on the web. The films being converted to digital formats include the James Bond and Pink Panther franchises, the Indiana Jones and Star Trek franchises, The Godfather, Forrest Gump, Braveheart, Crash, Monster’s Ball and the Saw and Tyler Perry franchises.

EPIX will also have access to all Paramount, Paramount Vantage, MTV Films, and Nickelodeon movies released after Jan. 1, 2008. It will have access to all MGM, United Artists and Lionsgate movies released after Jan. 1, 2009. At some point, it plans to convert all 15,000 movies for the online channel. It will feature original new TV shows, much like HBO has with its shows such as True Blood, and EPIX will have live event programs too.

Rensing says that the EPIX movies are being encoded in six format so you can watch them from a variety of devices, including cell phones that get the Verizon Wireless V-Cast pay TV service. Pretty much any home with a decent broadband connection — three megabits per second downstream — is eligible to get the movies. But EPIX still has to cut a lot of deals with broadband and TV service companies to make that happen.